Do we really need a Senate and a House of Representatives?  Considering the economic disparity between politicians and the masses (out of touch mindset), legislative gridlock, and general impotency of Congress, having two chambers may be a waste of resources. 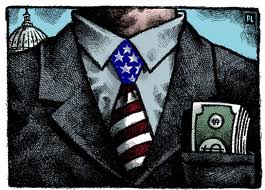 Refresher: We have 435 members of the House of Representatives and 100 Senators. States with larger populations have more representatives. Each of the fifty states has two Senators. In theory, Reps champion the causes of their local constituents. If they don’t, the voting public can give them the boot quickly because the election cycle occurs every two years. Senators are elected for six years with the intent of focusing on the good of the nation as a whole. Elected for longer terms, they can make decisions without influence from short-term public opinion. The two-chamber system has inherent checks and balances because both the House of Reps and the Senate must pass a bill or resolution before it goes to the President for approval or veto.

The nation’s political system has changed considerably since the Founders defined it two-hundred years ago. Over time, State’s rights have given way to Federal control. Also with endless funds given to politicians from special interest groups, Super PACs and similar organizations, our elected officials have become agents for these large money giving entities. Since both chambers are working for the highest bidder and not representing the voting public nor watching over the health of the nation, it is now legitimate to examine the necessity of the two-chamber Congress. Do we need a Senate and a House of Representatives that panders to the same group?

Since both chambers are essentially doing the same thing (and not necessarily the right thing), it’s time to get rid of one of them. Let’s eliminate the Senate. Each Senator costs approximately $3.5 million when considering salary, staff and overhead expenses. By giving pink slips to all of them we could save $350 million. This is not a lot of money compared to the overall U.S.budget but they are now redundant dead weight so give them the axe.

Keeping the House and booting the Senate would give the voting public a fighting chance. The House Reps must, at least somewhat, consider the public’s opinion because the election cycle returns every two years. Also, with the Senate gone, State’s rights may come into play again and allow regional governing inline with the will of the people without retribution from the Federal government.

Obviously, this is a tongue-in-cheek post. Eliminating the Senate would require a Constitutional Amendment. A majority of Senate would have to vote to fire themselves and that isn’t going happen. But I do hope this post points out the monetized-ridiculousness and bastardization of our political system.

The two-chamber system no longer represents the people nor does it protect the nation as originally conceived and defined in the Constitution…it now only serves deep pocket interests.