Archive for the tag “working class”

At the beginning of the year I promised to be less negative and focus on positive developments and ideas that benefit mankind and the environment. Well, I lasted two months…it’s time for some ranting.

The big debate this week is the corporate tax rate. Like clockwork, the Republicans want to reduce the rate for the big guys from 35% to 25% which I find utterly grotesque. But wait, we have President Obama who will apply some sanity in Washington, right? Oh yes, he is fighting really hard. He’s stepping up to the plate to take a swing for the American working-class with a big fat wet noodle. The President only wants to reduce the corporate tax rate to 28%. I’ve been an Obama supporter but people, we are getting screwed.

Check out these three charts. The first one shows corporate taxes as a percentage of income for companies that reported profits. As we can see, the effective rate has been cut in half starting with the Reagan years (1981). They’re only paying slightly more than five percent today.

The second chart shows the rapid increase in the national debt thanks to the change in corporate tax rates, again starting in 1981 (Reaganomics-Era).

This last chart shows the growing wealth disparity between Middle America and the wealthy. Can you guess when this disparity starts? You got it! It starts in 1981 with the lower taxes for corporations and the wealthy.

The Conservatives are puking the same old story, “lower taxes for the rich and corporations will create jobs”. After thirty years of failure, it’s surprising that half the population still believes this economic vomit. Big business continued job outsourcing and, adjusted for inflation, Americans make less today than they did thirty years ago.

Let’s try a novel approach; instead of giving gifts to big business before they create jobs why don’t we let them earn it. Increase the tax rate to 50% and then give tax breaks based on year-over-year analysis of job creation. If they create more jobs in the US than overseas (on a percentage basis) they get a tax break. The more they create the bigger the break.

I don’t understand why more people don’t get Mad as Hell with these crazy conservative tax breaks. History has proven that the middle class must pick up the tab for breaks given to Corporate America.

How much more of an economic whipping are you willing to take?

The American Left Part 2 – So What’s Important and What To Do?

A couple of weeks ago, I posted a critique of the American Left. I think these criticisms are valid and I stand by them completely. However, my own negativity has sunk into my brain and made me realize that I have only said half of what needs to be said – and maybe the less important half.

Here’s the other half…. or at least a decent start.

I was not specific about what I meant by “teammates” and our failure to accept them – and the consequences. I also complained that we have no coach, and yet I offered hardly a word of direction or encouragement myself. So let me say a little more about why we need to work together, and then I’ll do my best to say how we might start to do it.

Right now, we have many groups striving to be treated like human beings, or like human beings of equal stature to the almost mythical “great white male”. Of course this really refers to a very special class of white male – a class to which I do not belong.

Some of these groups represent different races, religions, or even ages, body-types, or sexual preference/status/identity. And let’s not forget the other class that is being thrown under the bus these days – workers. Some workers are members of unions, others are not. All are being downgraded in our economy. The worth of the American worker is at its lowest point in decades. Teachers and police officers (among others) are being “asked” (forced) to make sacrifices in order to avoid raising taxes on the rich by 3% or taxing corporations at all.

Each of these groups fights for recognition as “real” Americans and “real” human beings – and rightly so. But their fragmented, uncoordinated attacks on the status quo have made moderate gains on a time-scale measured in decades. This is because of a simple and obvious fact: when group A fights for group A, and group B fights for group B, each group is small and almost powerless. They have even been played against each other at times. 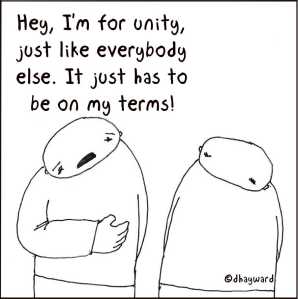 Then let’s work together!

Let’s get started. Today, I want every one of you to go out of your way to shake hands with someone different from you, but who might be a potential teammate in the battle against the status quo. Smile. Ask a question about his or her job, family, opinion on catsup vs. mustard, the weather, whatever! These people are your teammates. None of them is perfect and none of them is exactly like you, nor do they have exactly the same goals or abilities. Great! We NEED lots of different kinds of people.

Next, we need to break free from the superficial games that our elections have become. We can no longer vote for or against someone because of the way he or she looks, because he or she smoked a joint a couple of times, nor even because he or she cheated on his or her spouse. These things are irrelevant. And we can’t be scared off by the anti-tax boo-birds. Nobody is talking about raising taxes on the middle class… NOBODY! We cannot be scared back into the status quo! We need to send a shockwave through our election system… We are here, and we won’t be screwed anymore!

I’m not nearly qualified to serve as this team’s coach. But maybe this team will have thousands of assistant coaches, and I’ll volunteer for one of those jobs. We all just need to keep it in our minds that, together, we can improve the situation of each and every one of the aforementioned groups – and each group will do BETTER FOR ITSELF as part of a larger team than it ever would on its own.

The mixed bucket of crises that we have all faced and are facing has bred a fair amount of fighting and blaming within our team. The opponent is not within. Let’s focus our efforts. Together, with some reasonable changes, we can have comfortable, secure lives in a sustainable world. It’s easy to see how a unifying set of principles could incorporate the goals of groups concerned with the issues of race and gender and such. It might prove more difficult to create a unified philosophy and calls-for-action which combine these types of issues with the imperative of managing our planet and its resources sustainably, but the potential is there and it must be done.

As it now stands, the resources of our country and of the world are being stolen from all of us and used up at a phenomenal rate in order to enrich those who are already very, very wealthy. The fight for the rights of minorities, or women, or whoever will be meaningless if most of us are living (and dying) in extreme poverty in the middle of a colossal toxic waste dump.

The process of taking our resources (unless we can slow it down) will further oppress those who are already oppressed. We’ve seen, recently, how crises are used to justify increased oppression of the lower and middle classes. We must re-prioritize PEOPLE OVER PROFITS. We must reject the lie that profits benefit everyone. It may have once been true in this country, but no longer.

If we can advance this simple set of principles, we will all benefit.

That black man, that white woman, that Chicano, or that Vietnamese woman standing behind you at the grocery store is probably your teammate. That “hippie,” that nerdy-looking scientist, or that artist sitting near you on the train might have some ideas you would be interested in – or might be interested in some of yours. Meet these people. Start talking. Start a movement.