Archive for the tag “Ward McLendon”

On the outside of the Lower 9th Ward Village, where my friend Ward “Mack” McLendon, is struggling to provide a hub for the people who have returned to reclaim their homes and community, there is a colorful mural to track the people who lived here before Hurricane Katrina.

Here is a beautiful 7-minute video of Mac explaining what the mural symbolizes and why he has it in full view for anyone who enters the center or just passes by.

I want to help Mack realize his dream of a thriving community center to help the residents of the Lower 9th. I support his frank assumption that if we do not provide something stable for the children and keep them in a safe environment, then they are vulnerable to a tough street reality. A summer camp will keep these children off the streets and give them a positive and exciting experience.

This is the second of three posts (a link to the first post) about Mack and his vision. If you can possibly help, please click here. Every dollar brings the community center closer to making the dream a reality. Thank you for considering a gift to the Lower 9th Ward Village.

A Man Who Won’t Give Up

Every year since Hurricane Katrina I have taken students to New Orleans to help rebuild the community smashed by a natural disaster, exacerbated by human negligence, and compounded by government disorganization (you can just tell that this is an objective post!). I have blogged about this a few times, but since returning this year, I have not done so.

This January, I met an amazing man. Ward “Mack” McLendon lost his house and his antique cars that he renovated in the Lower Ninth Ward. While he fought to keep his property in an outrageous bureaucratic battle (Mac has still not moved back into his house), Mac put a down payment in 2006 on a hangar-like building on Charbonnet Street. His plan was to have a place to revive his hobby with the antique cars. But Mac soon had another vision, one that involved using the building to bring the community together. 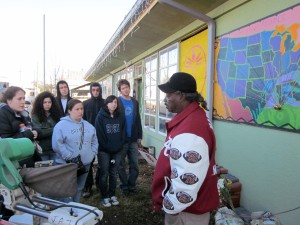 “When I got the keys in my hand and stepped inside the building, I started thinking about a community center that I came up in (in the Upper 9th Ward). A little voice came to me and said, ‘You didn’t lose your life, you didn’t lose your immediate family, you lost things. You can replace things.’ That was the beginning of me finding my purpose.” Source

When our SF Hillel student group arrived, there were beautiful murals around the building, but the main area was full of junk and garbage, Mac had no problem motivating us to empty the area, filling our ears with his dream of a summer camp so that children will find protection from the rough street environment. In a day and a half, we had emptied the hanger, and helped shlap planks to a group of volunteer carpenters.  While we were ready to congratulate us, Mac sent us out to the neighborhood. “Knock on doors and ask what people need,” he said. “We gotta help everyone.”

One of the inspiring murals.

Today, Mac’s building is a community center called The Lower 9th Ward Village. Neighbors are invited to use the computers, children have a nurturing environment to do homework and a safe space in a tough neighborhood.  There are plans for a recording studio as many young people are imbued with the music culture of the Crescent City. There is also a lending library, basketball hoops and now a stage.

Courtney Miller and Erin Pellebon, who live next door to each other in a shotgun double across the street, said their kids throw their backpacks on the porch when they get home from school and run to the center to play basketball and get help with their homework. “There’s nothing really around here for the children to do,” Pellebon said. “I really appreciate those volunteers.” Source

When Mac talks about his vision, he is simply inspiring. You truly feel in the presence of a spiritual man. When he started the Lower 9th Ward Village, “the most beautiful light in the world popped on,” he said. “It never felt like a job. It can’t be a job, because I don’t get a paycheck.” He believes most people die without ever finding their purpose in life. “I guarantee you, if you find a purpose, it will be serving people some kind of way,” he said. Source

Every day when we finished our work, Mac has us sit together and ‘invites’ everyone to share a reflection. You can’t refuse Mac, and even the shyest find their tongues. Mac says: “This place is like magic.” Source

That is because this is a man who is passionate, humble, appreciative and willing to dream in the face of adversary. He is the epitome of why people lie myself can’t help but return year after year.  When New Orleans gets under your skin, it is not just the beauty or the music, it is the magical people like Mac.

In August/September 2005 we failed the people of New Orleans. They are rebuilding their community. We cannot fail them again. America will be forever stained until New Orleans is rebuilt, until people like Mac have their houses back and until their communities are again thriving.

Please consider joining me in giving a small gift to help the completion of the community center and the summer camps. You can donate by clicking here.