Archive for the tag “vehicle”

Out of necessity, I’ve become a hypermiler. I am now commuting up to seventy miles a day in a 5,000 pound Ford F250 pickup truck powered by a V10 engine. In the city, I get approximately 11 miles per gallon and about 13 on the highway. It’s safe to say this vehicle is not a gas hog; it’s a fuel sucking Tyrannosaurus rex. 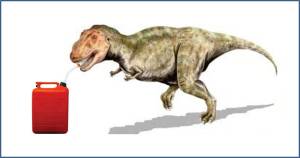 Hypermiling is the practice of driving using techniques that maximize fuel economy. Those using these techniques are referred to as hypermilers. It gained popularity as a result of the rise in gasoline prices during the late 2000s. A month ago I was getting about 380 miles per tank of gas but now I’m hitting close to 470 miles. As a former racecar driver, it is difficult for me to drive in a manner that conserves energy over distance; my instinct is to save time over distance. I’m learning that it takes a lot of awareness and concentration to optimize fuel efficiency.

With all the computers now in our vehicles and in the smart phones we carry, where is the app that can help me hypermile? These devices have GPS and accelerometers so they should be able to coach us with voices commands and advice. Examples: 1) “Given the speed limit on this road, you are accelerating too fast, back off the gas pedal, 2) “The next traffic light will turn red in 5 seconds, left off the gas pedal and coast”, or 3) “the next two traffic lights will stay green for 45 seconds, increase speed to 5 miles per hour over the limit to avoid breaking for a red light”.

All the technology exists to help us save millions of gallons of fuel per day across the country. We just need to apply it in a smart way.

Living Without a Car in Berkeley – RhondaJo Boomington

Since moving to the Bay Area, for the first time in my life, I am living car-free. I love riding BART though I don’t particularly love AC transit and MUNI. I feel deeply grateful to live in an area that makes car free living relatively painless much of the time.

And bless the hearts of my friends, with cars, who help out occasionally with some of the heavy things I can’t negotiate without a vehicle.

In Berkeley, however, I have become accustomed to a certain degree of discrimination when people learn that I don’t have a car. Often there’s a certain look that comes across their face. A judgment.

And, incredibly, it’s often the most vocal environmentalists who seem to have this reaction.

Last year, I was at a well attended meeting at a church that I had attended regularly.  A very middle class, “oh so environmentally friendly,” progressive church who “welcomes diversity.”  A drenching rainstorm began.

I had injured my ankle that afternoon, and for the first time ever,  I asked if there was anyone who may be able to give me a ride home. I lived about a mile away.

There was absolute dead silence.

I was very wet by the time I limped home in the torrential rain.

Maybe their disdain was simply because of my Southern accent, the fact that I’m not slim, not hip and am happily frumpy?

But now, I have witnessed similar reactions in various places – to others who live a car free life.

And, right before it went out of business , I was in the beloved Elephant Pharmacy, and my worst fears were confirmed.

While buying my monthly AC transit pass, the guy working behind the counter asked if I had a car. I said “no.” He went on a pained, quiet tirade about the discrimination he experienced in Berkeley because he didn’t own a car. And the most blatant slights seemed to be from the most fervent environmentalists.

Hmm. And – he had no accent, was quite young and slim and hip and styled perfectly for Berkeley.

I wonder why (from info.gtilite.com)

RhondaJo Boomington is a Southern transplant from North Carolina. She landed in the haven of Berkeley six years ago and never plans to leave. Formerly a fundamentalist who voted for Jesse Helms many times, she now relishes her liberal lesbian life in the Bay Area. She has earned a J.D. and a Masters of Divinity, and  enjoys performing in the Bay Area as a stand up comedian and solo performance artist.