Archive for the tag “unjust arrest”

Throw away society – including people. By Rhondajo Boomington

Marie Joseph, a 36 year old Massachusetts woman, accompanied a neighbor’s child to a public pool this past Sunday. She slipped and drowned by 2pm that afternoon – and lay at the bottom of the pool for two days. During those two days, the pool remained open.  As usual, people swam and frolicked. And two city inspectors came by to inspect the pool, noticing the cloudy water, but did nothing. Marie’s body floated to the top of the pool on Tuesday evening, where it was discovered by kids, who had jumped over the pool fence after hours.

The child who accompanied Marie to the pool immediately went to the lifeguard on Sunday afternoon. Told the lifeguard that Marie slipped at the slide, went under the water and never resurfaced. The lifeguard took no action. The child tried to locate her, but was not successful.

Evidently the deep end of the pool was cloudy, and so the lifeguard chose not to follow up on this reported drowning. That night, Marie’s cell phone was found at the pool and the police were notified. But no one had reported Marie missing. So nothing happened – until two days later when she floated to the surface. 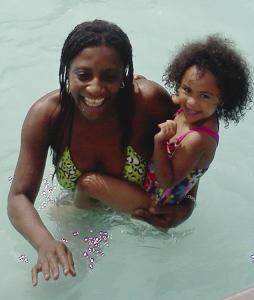 This tragic death should never have occurred. And various explanations will surely be unearthed now that every investigator in town finally cares about Marie.

Through the multifaceted lens of tragedy, the one image that screams out above the rest for me is one of class, poverty, privilege and race.

Certainly we liberal, educated, caring people would never have allowed something like this to happen in our neighborhood.

But my point is, something like this would not have happened in our neighborhood.

The water in the pool was so cloudy that no one could see at all through the water at the deep end. But their pool remained open, business as usual. We would never have stood for our children swimming in such water.

And, if we were to report a drowning and get no response from a lifeguard – we would raise a ruckus. Call 9-1-1 and the police ourselves. We have the freedom to do that because of the privilege to which we have become accustomed.

A few years ago, I regularly attended a largely African-American church in Oakland for about a year. During that time, I became acutely aware of the differing messages that my white, Berkeley neighborhood kids were getting versus those of the church kids. The parents taught the neighborhood kids certain lessons, ensuring that they would have tools to be successful in their world. The kids learned that their opinions matter. That  respectfully and forcefully asserting their rights gives them the power to change their corner of the world.

In contrast, the focus for the kids at church (particularly males) was how avoid being unjustly jailed. (And yes, many church members knew of numerous cases where relatives had been unjustly jailed). Adults taught the kids that being quiet, even if it was clear the authorities were wrong, was the way to avoid jail. The kids learned that increasing power in their corner of the world occurs by remaining silent enough to avert  bringing attention to themselves. Only then can they have the opportunity to receive an education, to remain free, marry and raise families.

So – if the child of Marie’s neighbor learned those same lessons, this story makes more sense. The child told the lifeguard that Marie had gone to the bottom of the pool and not resurfaced. The lifeguard ignored him. If it had been you or I – we would have raised a ruckus and made sure the authorities were called. Perhaps this boy feared that raising a ruckus would only land him in juvenile detention.

With this explanation, Marie’s story makes more sense. But makes it even more tragic than meets the eye.