Archive for the tag “Tim Geithner”

Obama and the Arc of Hopelessness – Norman Weekes

From Alon: I met Norman Weekes over the summer. He is a thoughtful, erudite man. I am very happy that he will write a  couple of posts a month for Left Coast Voices. Welcome aboard, Norm.

Obama and the Arc of Hopelessness

I thought about my brief phone bank exchange with a voter from the Sunshine State while I watched Obama address the Grant Park crowd on election night at the Marriott in Oakland. I phone banked for Obama a few days before and thought about calling my Florida friend. It was a fleeting thought. This was a time for pride and promise.

I didn’t really know Obama then. I didn’t know his rhetoric concealed the fact that he has the guts of Urkel, the bravery of the Scarecrow and would lose a fist-fight to Betty White.

Why resort to name calling and personal insults you say? Why disrespect the man and the office like that? Don’t forget he inherited the Bush economy and the Republicans are bad people blah blah blah. Why? Because I have every right. I’ve been disrespected by Obama’s substitution for rhetoric over action. Name calling? I’d rather be called a punk than be called unemployed (which I am).

Personal? Long term unemployment is very personal. So don’t tell me about being too hard on the President. If you’re still hesitant to criticize the President you may believe OJ was set up and all the Jews working at the World Trade Center called in sick on 9/11. If so, I can’t dialogue with you. We can exchange food recipes but not talk politics.

A couple of weeks ago Pulitzer Prize winning journalist Ron Suskind started his book tour promoting Confidence Men, a behind the scenes look at the Obama Economic team. He had access to the team, interviewed the president and reported on the organizational interaction and leadership arc of Obama and his economic advisers. Suskind, a self proclaimed Democrat has been derided by the White House for his reporting and analysis. According to Treasury Secretary Tim Geithner the book is filled with “sad little stories” that do not resemble the reality of the time.

One sad little story is the response by Obama to the banking crisis. In the fear filled days of the crisis the Obama economic team debated as to how to deal with the banks. After listening to his team debate Obama concluded the government needed to take action to boost confidence, hold banks accountable and take control of toxic assets. To simplify, the choice was to act like the government of Japan in the 90’s or Sweden in the same decade. Obama choose a more Swedish like approach and decided to break-up Citibank, at that time the weakest of the” too big to fail banks”. He ordered Tim Geithner, who disagreed with the President to draft a plan to break up Citi.

A few weeks later Obama asks about the plan at a follow up economic meeting sans Geithner. He was told by Christina Romer, Chair of his Council on Economic Advisers there was no plan. Obama replied, “Well there’d better be!” (Goshdarnit!). Suskind says Geithner “slow walked” the policy. Washington is paralyzed but is still great at manufacturing euphemisms: slow-walking a policy, re-litigating policy, uneven policy implementation, etc. Here on Earth it’s called insubordination and regular folk get fired for it every day.

Last I checked Citibank is still Citibank, toxic assets are still on bank balance sheets and Tim Geithner is still treasury secretary. The banks and their investors have still not suffered the consequences of risky investment strategies. It’s mind-blowing Geithner has the balls to blow off the President of the United States. It’s even more amazing he’s still on the team. How arrogant do you have to be to ignore the President on a policy difference rather than resign? What does  that say for Geithner’s opinion of the President? How conflict adverse do you have to be to not fire someone who openly ignored your order?

I’m beginning to understand why single payer disappears, financial reform is weak, job stimulus is loaded with tax cuts (which don’t create jobs) serious job creation is ignored, Bush-based foreign policy continues and Obama gets rolled by Republicans on the debt, tax cuts for the rich and program cuts for the poor and middle class. Obama allows this by not fighting back. It’s that simple. My son asked me a couple of weeks ago why Obama’s getting all this heat. I told him, “Obama’s the guy on the basketball court you can push around and elbow all day long and nothing will happen. People just want to see him fight back.” 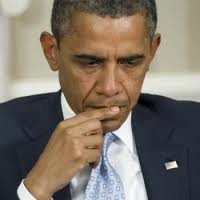 Is it his expression or the grey hair?

Erudite criticism is ignored. Criticism from people who use oligarch in everyday conversation is not working. When he has an opportunity to acknowledge he tells the Congressional Black Congress to “stop whining.” There’s no fight in this guy. It’s as if he never had to turn back and fight the bully at school than take an ass-whipping at home. I’m past frustrated and angry.

Hopelessness in Obama is on the horizon. I cried the night Obama was elected. I’m still crying now.