Archive for the tag “The Trout Whisperers”

Richard Goldman passed away on November 29, 2010. He was a great man who amassed considerable wealth and used that wealth to help enrich the lives of so many others. Richard had three passions when it came to philanthropy: San Francisco, Judaism and the State of Israel, and environmentalism.

I owe him a lot. He promoted green causes before it was fashionable to be an environmentalist, including in Israel, a country consumed with surviving today, and unable to look ahead to tomorrow. When helping to build the green framework on my Kibbutz, Kibbutz Lotan, his name topped the list of people to go to for support. When I became Executive Director of the San Francisco Hillel Foundation, he provided the resources to help us match the growing needs of the city’s Jewish students. 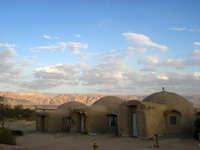 His memorial service was a fitting tribute. in the packed synagogue many leaders and dignitaries from our city and Jewish community paid eloquent and fitting tributes, But I was most impacted from the stories shared by his surviving children: John, Doug and Susan. I think that being a father, hearing how others pay tribute to their parents is profound. What will my sons say about me when my time comes?

They related how their father was a tough, no-nonsense kind of guy. He lived by excellence and appreciated it in others. I think this might be why he fly-fished. Having fished for most of my life, I took lessons while on vacation this summer to learn how to fly fish. This was inspired a great novel, The Trout Whisperers by Pete Bodo, and perhaps from 20 years of studying martial arts. I feel that I can really appreciate the beauty in fly fishing’s elegance and style.

One son recalled how Richard loved to be out on the McKenzie river, rod in hand, and how he became a softer man as he gave himself up to the rhythm of the fly and the flow of the river.

There is something humbling about being a part of nature, if only for a few hours. This summer I  met an elderly angler who rents a cabin for two weeks every year and his sons come from wherever they are to join him and fish. He spends 50 weeks a year waiting for that time of the year.

But the magic I heard at Richard’s memorial service came from it being recounted by his son. It was special to hear how a child, now a man, had found a special way to connect to his father on the river. Ernest Hemingway’s son, Jack, tells a similar story in his memoir – Misadventures of a Fly Fisherman.

Mr. Goldman, thank you for all you did for me, our city, and the Jewish people. Through your generosity you gave many of us fish so that we could eat, and taught many to fish so that we could sustain ourselves. Someone once surprised me in a workshop by adding an additional line to the famous saying:

Give a man a fish and you feed him for a day.

Teach a man to fish and you feed him for life.

But teach a man how to teach others to fish, and you begin to feed the whole world.

This, Mr. Goldman, you did not achieve with your fly rod, but your philanthropy and your vision.

“May you find a seat waiting for you in heaven.”