Archive for the tag “tax loopholes”

Treasury Secretary Timothy F. Geithner has warned that the U.S. government will default, if the debt ceiling isn’t increased by August 2, 2011. He goes on to says, “this would have severe consequences for the economy”. 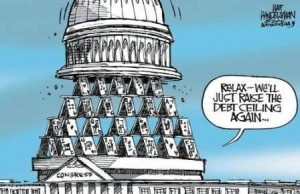 Lately, the debt limit or ceiling has received a fair amount of press because the Republicans are refusing to vote affirmatively to raise it. Keep in mind that the debt ceiling has been increased approximately 75 times in the past fifty years. Increasing this limit is nothing new and has occurred more frequently under Republican administrations.

The conservatives are trying to handcuff the Obama administration with their no vote. Newt Gingrich orchestrated the same failed-maneuver during the Clinton administration. Republicans won’t increase the limit until the Obama administration makes more budget cuts. Essentially, they want to remove $2.4 trillion from the budget over the next ten years. The President will not cut the budget until tax breaks given to the rich under the second Bush administration are eliminated and tax loopholes are closed for big business. So here we sit, stuck in political mud.

The solution is simple. Look back in time and see what worked. During the Clinton administration, the U.S. had one of the best economic eras in its history. Just undo the George W. Bush  craziness that’s still in place; bring back the Clinton tax brackets, get rid of the mid-2000 corporate tax loopholes and roll back expenditures on Defense. We don’t even need to cut Defense spending all the way back to the 1990s level.  We can double the Clinton-era Defense spending and still save $3 trillion over the next ten years which is $600 billion more than the conservatives want.

The Obama administration needs to man-up and get rid of the irresponsible financial policies put in place under G.W. Bush, as promised. Republican politicians need to quit the political sound-biting and do something constructive for the middle-class.

The debt limit discussion is just a diversionary storm in a water-glass.