Archive for the tag “suicide”

Now I know that those of you who have supported the Giants through thick and thin regard people like me with disdain and I actually respect that. Here I am, a relatively new transplant, fresh off the boat, and the first time I attempt to absorb myself in the true essence of American culture, the Giants win the World (excuse me – US) Championship, and there I am strutting around the city with my Giants T-shirts and scarf. 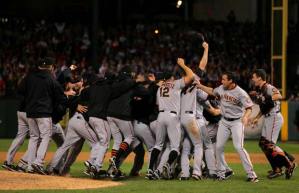 Truth is, my wife (also very community conscious) and I were enthralled by the Giants during the season as we saw that what was pushing this team on (apart from considerable talent) was an amazing team spirit, an all-for-one-and-one-for-all attitude, and a handy propensity to ignore the stats and the commentators who read too much into the aforementioned stats.

Having already celebrated winning the championship six months ago, why bring it up now? I believe that a team should reflect its town and its supporters. San Francisco is a unique city, excuse me – City – and so are our Giants.

I am proud that the SF Giants have decided to be the first professional sports team to endorse the “It Gets Better” campaign, which began as a response to a spate of bullying young homosexuals culminating in a tragic suicide of Tyler Clementi, a freshman at Rutgers back in September.

The Giants made their decision after receiving a petition signed by over 6,000 Giants fans and will produce a video to support the campaign. The sports world remains a macho and often homophobic and racist environment. One of my favorite soccer players, Thierry Henry (a black man), endured monkey sounds being made by a small segment of opposing fans when my team played in European games. Recently, even one of the all-time best NBA players was caught making an anti-gay comment.

I am proud that the Giants have made a stand. You win in sports by never compromising on your commitment to win, by never giving  an inch. This is the only way to deal with racism and homophobia and who better to lead us than those who understand what it takes to win.

Today is Harvey Milk Day, a commemoration of the life of Harvey Milk, who became the first openly gay man to be elected to public office in California and who was assassinated for being gay. It is a fitting day to come together as one City, one baseball team, one community. 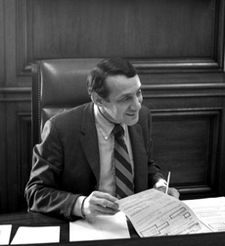 Harvey Milk sitting on the SF Board of Supervisors