The following Disassociated Press Article was apparently beamed back to the present day from the year 2029 in an as-yet-uninvented time machine or possibly a wormhole in the space-time continuum:

A settlement in an undisclosed amount was announced today in case of the PG&E (Pacific Gas & Electric) napalming of large areas of northern California back in 2016. This was an incident in which several thousand people were killed and hundreds of homes were destroyed.

Attorneys for the plaintiffs in the case, survivors of the event, argue that PG&E deliberately burned many acres of trees in order to eliminate interference with their power transmission lines.

Gordo Assesino, chairman of PG&E since 2027 was interviewed outside the courtroom:

“This was really just a continuation of the program of elimination of ‘flesh-based’ jobs that we began back in 2010. That’s when we started, on a large scale, to replace meter-readers with microwave-band radiation emitting ‘smart meters‘. Installing the smart meters was a huge investment, sure. But in the long run it saved us many millions on salaries and retirement benefits that we would have had to pay out to our flesh-based implements. And although there were countless health ‘problems’ reported, pinning the cause on the smart meter radiation proved to be too difficult, especially since we had all the government regulators like the CPUC on our payroll.”

Assesino continued, “In 2012, the executive board realized that PG&E was spending around $180 million per year clearing tree branches and other vegetation from our power lines. Then we put two and two together and realized that what had worked with meter-readers would work with trees!”

So, in what was (to say the very least) a very bad pun, just as PG&E had fired meter readers and replaced them with “smart” meters, they “fired” the trees – literally set them on fire by dropping napalm onto heavily vegetated neighborhoods. According to PG&E, this reduced the need for trimming by 90% in what they called the “rollout” or “application” areas.

Assesino: “Of course, there were some collateral damages. A few lives were lost and a few properties were damaged. But overall, the program was a success and we were able to cut our vegetation control costs by an astounding amount. And we certainly do appreciate the sacrifices that some have made in order to allow this boost to our economy.” 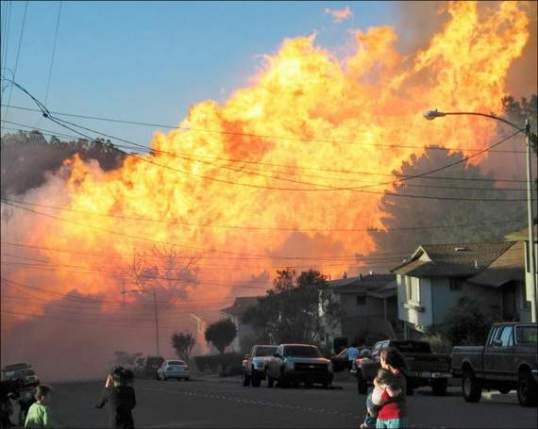 The wrongful death suit, among other legal actions, was brought in 2017.

Assesino: “The board knew that most of the litigants would simply die before the case even reached the courts. In the meantime, our lawyers filed motion after motion in order to delay the case as much as possible. If you look back at the case of the Ford Pinto, strictly from a business perspective, even with the damages awarded, Ford profited over $100 million from the entire product cycle. And those are 1977 dollars! You can see from this that what looks like a skeleton in Ford’s closet it really a “golden skeleton.”

When asked why he would make such a bold statement in public, Assesino said, “We’ve found that we no longer need to maintain the facade that we “care” about our customers. We have them by the you-know-whats. They need us.”

“If the plaintiffs see us as a huge, cold, corporation, they will only be intimidated and become more likely to just drop the case or at least settle for a lesser sum. Our lawyers convinced the judge that most of these people could have died anyway, for who knows what reason. They took the smoking gun and buried it so deep that the plaintiffs became afraid they would lose. That’s why they settled.”

“I’m not supposed to tell you anything about the settlement that was reached today, but I’ll just say that it’s far, far below anything that will make a significant dent in our profits. This will be yet another golden skeleton in our closet. This should inspire confidence in our stockholders, which will be a good thing for the overall economy. Way back in 2010, we miscalculated the balance sheet with our natural gas pipelines, it’s true. We honestly didn’t expect as big a fire as there was in San Bruno. But enough years have gone by that I can tell our stockholders now, we still came out on top of that deal too.”

With that it appears that it’s back to business as usual. In fact, on news of this settlement, PG&E stock went up 16 points today.

The Wonderful, Magical Adventures of PG&E

Hello boys and girls! Today, I’m going to tell you a story about a most wonderful company, PG&E. It sounds a little like “piggy” doesn’t it? Hee hee hee! Ah, PG&E. Pacific Gas & Electric. What a great example of capitalism at work. And what an impressive decade they’ve had so far – and it’s only the second year!

Let’s travel back… to a time when life was simpler – 2010, when dinosaurs roamed the land. The “mid-term” elections were coming up, and PG&E had a great idea: “Why don’t we make it illegal for the government to ‘compete’ with us, so that we can make EVEN MORE MONEY?!” And so, the little magic elves at PG&E went to work to craft a bill that would screw the people of California, all the while knowing that their magical PR department would craft messages to make it seem as if they were doing what’s right, American, and patriotic!

They came up with a magical plan called Proposition 16 – an innocuous, innocent name, no? Prop 16 would have made it much, much more difficult for those evil citizens cooperatives (booo!) to purchase power for their communities at lower prices – interfering with PG&E’s loving, all-American, freshly-baked and aromatic profit potential.

PG&E valiantly spent $46 million of their customers’ money in their forthright attempt to set things right. But, alas, they failed. The people of California just could not be made to see that paying higher rates for power would make PG&E’s profits even higher, and wouldn’t that be good for everyone? Poor deluded souls.

But wait! All was not lost! PG&E had other plans, already in progress, to make EVEN MORE MONEY. One involved a little risk, but fortunately, it wasn’t risk to the company’s profits! The risk was to the lives and property of PG&E’s customers instead! Hooray for PG&E!

You see, boys and girls, it turns out that PG&E has been “saving” (wink, wink, nudge, nudge) money for years by lying to those mean-old government regulators (booooo!) about their high-pressure gas pipelines. The lies were stacked upon other lies that they had already told – lies about materials, thicknesses, welds, joints (no boys and girls, not the fun kind!) and pressures. PG&E figured that nothing would ever go wrong because those mean-old regulators were just too careful anyway. The pipes didn’t need to be that safe, did they?

So, when something finally went wrong, PG&E lost a small handful of paying customers – nothing to cry about for sure. And while they also had to pay some “damages” to people who missed their mommies and daddies, none of the decision-makers that had caused this mess would ever have to go to jail.

You see, boys and girls, that’s how our system of corporate insulation works. If a person kills someone, he’ll go to jail. If a corporation kills someone, it’s just “collateral damage” to the profit-making process – just like when we go to “liberate” some people in a far away land by killing them! Isn’t this a nice story?

But wait! It’s not over yet! PG&E has even more fun ways to make EVEN MORE MONEY! Lately, they’ve been secretly (and not so secretly) swapping the meters that tell the meter-reader how much electricity people use with automatic machines! These “smart meters” emit radiation in the form of a microwave radio signal (PG&E says it’s really safe – and why wouldn’t anyone trust them?) so that they can fire all their meter-readers. Yaaaayyy!

So now, as some smart people called “economists” say, these meter-readers are free! Free to go and find another job. Oh, how nice for them!

So you see, boys and girls, in America we love to lock up people who rob a liquor store or smoke something funny. But in the meantime, we let the real criminals do whatever they want to do! And get disgustingly, filthy rich in the process! Soooooo, what’s the lesson here? Are you going to go out and rob a liquor store? Are you going to go out and get a job (as a meter-reader maybe?) and work like a dog until you get replaced by a machine and HAVE to rob a liquor store to stay alive and feed your family? Of course not. You’re all going to grow up to steal and poison and kill on a massive scale, aren’t you? All you have to do is believe and your dreams will all come true!