Archive for the tag “Reaganomics-Era”

At the beginning of the year I promised to be less negative and focus on positive developments and ideas that benefit mankind and the environment. Well, I lasted two months…it’s time for some ranting.

The big debate this week is the corporate tax rate. Like clockwork, the Republicans want to reduce the rate for the big guys from 35% to 25% which I find utterly grotesque. But wait, we have President Obama who will apply some sanity in Washington, right? Oh yes, he is fighting really hard. He’s stepping up to the plate to take a swing for the American working-class with a big fat wet noodle. The President only wants to reduce the corporate tax rate to 28%. I’ve been an Obama supporter but people, we are getting screwed.

Check out these three charts. The first one shows corporate taxes as a percentage of income for companies that reported profits. As we can see, the effective rate has been cut in half starting with the Reagan years (1981). They’re only paying slightly more than five percent today. 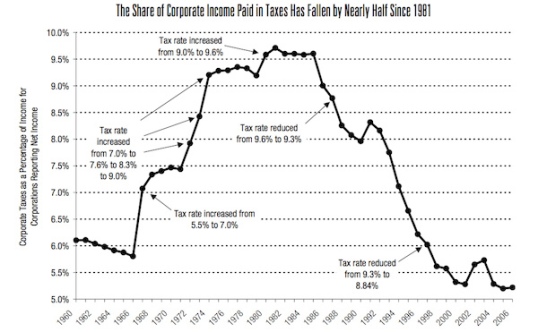 The second chart shows the rapid increase in the national debt thanks to the change in corporate tax rates, again starting in 1981 (Reaganomics-Era).

This last chart shows the growing wealth disparity between Middle America and the wealthy. Can you guess when this disparity starts? You got it! It starts in 1981 with the lower taxes for corporations and the wealthy. 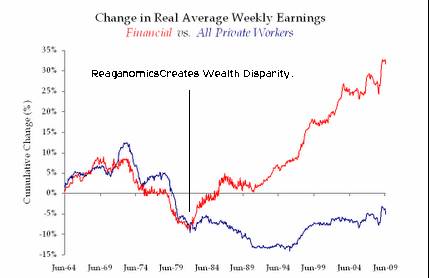 The Conservatives are puking the same old story, “lower taxes for the rich and corporations will create jobs”. After thirty years of failure, it’s surprising that half the population still believes this economic vomit. Big business continued job outsourcing and, adjusted for inflation, Americans make less today than they did thirty years ago.

Let’s try a novel approach; instead of giving gifts to big business before they create jobs why don’t we let them earn it. Increase the tax rate to 50% and then give tax breaks based on year-over-year analysis of job creation. If they create more jobs in the US than overseas (on a percentage basis) they get a tax break. The more they create the bigger the break.

I don’t understand why more people don’t get Mad as Hell with these crazy conservative tax breaks. History has proven that the middle class must pick up the tab for breaks given to Corporate America.

How much more of an economic whipping are you willing to take?