Archive for the tag “private teacher”

There are many good reasons to live in the San Francisco Bay Area: the public schools, the politics, unpredictable but ultimately great weather, and the amazing people, many of them artists, who gravitate here.  Two weeks ago, I attended debut author, Corina Vacco, a member of our writer’s circle, at her book launch for My Chemical Mountain (I am wearing the T-shirt, as I write this!).  The place was full of our writer friends, who have all toiled over each others work, offered encouragement, critique and shared successes and less successful times.

At the beginning of the month, I attended a first live performance of Ahri Golden, a friend and member of our  very special Jewish community, Chochmat HaLev, She played at The Red Devil Lounge on Polk Street and I have to admit, my better half dragged me along – midweek social events after a long day at work is never greeted with enthusiasm – but she just blew me away with her amazing voice and meaningful lyrics. 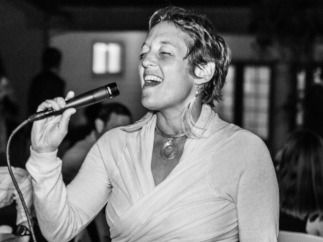 Ahri is financing her album through Kickstarter, a crowd-sourcing way to raise money for projects. Ahri must raise $15,000 (breakout of costs on the webpage) by the end of this month. For a $25 investment, you will receive a CD of the album and a copy of the cover art (for as little as $1 you will receive good karma points).

Please listen to her music and consider investing in an exciting new Bay Area voice. If I haven’t convinced you, check out what Ahri has to say below.

I am an award-winning public radio producer turned singer/songwriter. The journey to my singing and songwriting life has been a transformative odyssey, which began at my grandmother’s funeral in 2003. Bernice Friedman was a pillar of grace and wisdom in my life. She died suddenly in a tragic car accident only 9 days after my wedding. When she passed on, my mother, who always wrote and delivered the most brilliantly eloquent of speeches, was devastated, inconsolable, and speechless. I wrote the eulogy, enacted the story of my relationship with my grandmother, and sang. It was the first time I ever sang to a large group of people. It was cathartic and had planted a seed toward finding my voice.

Fast forward to 2009, when my son was 4 years old, and a new big brother, I became oddly adamant that he take music lessons.

I hired Dave Rosenfeld, who was a musician, music producer, private teacher, and creativity coach. Conveniently, he lived just a few blocks away. After a handful of lessons it became hard to get my son motivated to go. One day, I was struggling for us to make the lesson on time and he said to me with great frustration and breathtaking wisdom, “Mom, I don’t want music, YOU want music!”

I stood there, dumbfounded. We stared at each other. I remembered the visceral experience of singing at my grandmother’s funeral in a flash.

Then I took a deep breath and said, “Wow. You’re right. I do.” He was right. I wanted music. My son called a spade and spade. I listened.

The next week, I took his place in the music lessons with Dave and we’ve collaborated every week for 4 years to improvise, open and hone my voice.

Ahri has only 10 days left to raise the $15,000 – if she doesn’t, Kickstarter will not take your money. If you are as impressed as I am with Ahri’s voice and potential, please don’t delay and invest in another beautiful Bay Area voice.