Archive for the tag “perpetual growth”

Roger Ingalls has been authoring on this blog for just over a year now, and through his posts, you’ve learned his philosophies and hopes for the world.  But who is the man behind the words?  Here, in this exclusive interview, we learn more about the wizard behind the curtain.

I asked Roger what the most important advice is that he’s ever received.  “When in doubt, fake it. This advice came from Mr. Davis, a high school teacher and it got me through many a tough circumstance. As a leader, you’re expected to be the guiding hand in most, if not all, situations but the problem is nobody knows everything. So you have to fake it to instill confidence in your team. In reality, very few people will challenge you because they’re either scared or lack confidence themselves. However, faking it should be used as a last resort tool and not as a primary game plan.

Roger agreed that books are a most important influence on us as a society.  “I can’t choose just one because they’ve both taught me so much.”  He responded when asked to name his favorite.  “The first book was written 2500 years ago by Sun Tzu called the Art of War. The second book is titled Competitive Advantage by Michael Porter. Both books teach strategy and tactics with one being from the perspective of war and the other from business. They’re both great reads for people wanting to develop competitive thinking skills.”

Having survived decades in the competitive hi-tech industry of Silicon Valley, then transitioning in to blue-collar ownership, how has he survived this downtrodden market and economy?  “Adaptability or willingness to change. If we don’t. we become obsolete. The sure way to gain advantage over a foe or competitor is to change because they will always be one step behind.”

Everybody has a hero, and Roger is no exception.  “Muhammad Ali.”  He goes on to explain: “He was strategically the greatest fighter of all time. He studied his opponents and adjusted his boxing tactics accordingly.  He overcame racism and fought the U.S. government when his beliefs were attacked. He became a great humanitarian and is the most recognized person in the world.”

Roger has touched on religion often in his writings.  I asked him what he considered to be the good, the bad, and the ugly.  “Religion is good for discipline. But it also teaches inflexibility and squelches thinking outside the ‘good book.’. In western cultures, those who routinely practice the three original monotheisms (Judaism, Catholicism and Islam) are the hardest and the most devoted workers. Religions that promote discipline through routine are synonymous with a good work ethic. The down side of this is a lack of understanding of different cultures and religions.”  He paused, seeming to reflect upon his own past.  “Sometimes straying from one’s path is the best plan.”

To sum things up, I asked Roger to give us the world in a nutshell.  “We are a naïve society. Immersed in greed and the belief that Earth has an endless supply of resources to fuel an economic system based on perpetual growth. In the back of our minds we know this is not possible but few of us are willing to step up and say so. It’s a tough situation because the whole world now follows this economic agenda.”

“Only the inevitable collapse will force a change.”

We can debate the dangers and virtues of nuclear power but its proliferation is inevitable. Pro and con arguments are irrelevant. One basic human need makes nuclear power an absolute necessity.

Water is humanity’s lowest common denominator. Without it we die. Drinkable water is precious and in short supply. Only one percent of all water on Earth is potable and accessible. Currently, twenty percent of the world’s population does not have daily access to fresh water. Let me rephrase, “today, November 17, 2011, approximately 1,400,000,000 people will not taste safe water”.

Fast forward 40 years to 2050. The number of people on Earth has increased by 50% and now sits at approximately 11 billion. Since the Earth won’t magically make more potable water, half the world’s population (7 billion) will struggle to survive. 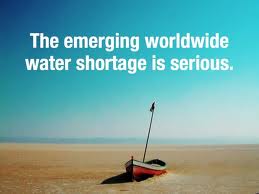 Clearly, something needs to be done. We could just let people die off but that would be an economic disaster because we need an ever-expanding population to fuel our financial system that is based on perpetual growth (crazy as that sounds living on a finite planet).

The only option we have is turning salt water into fresh water. Desalination is an energy intensive process. Today, fossil fuels are already stretched thin and most energy experts say we are in or heading into a peak oil scenario where we are draining cheap oil reserves faster than we can find new ones. Also, oil and natural gas are used to manufacture pesticides and fertilizer (respectively) so they will be in heavy demand for agricultural purposes to feed the new billions.

The only way we can produce an adequate amount of fresh water is by running desalination plants with nuclear power.

Again, the arguments about safety are irrelevant. We need to look at this in terms of future lives saved. Nuclear power will prevent the deaths of billions from starvation and thirst. Forget about saving 30 or 40 people from radiation poisoning over the next 50 years – that’s crazy logic.

Think in terms of benefits. Think a generation or two into the future.

* The 104 nuclear power plants operating in the U.S. over the past 40 years have not caused a single death while wind energy has already killed 41 in its short existence.