Archive for the tag “Packers”

American football, the greatest sport ever conceived. It has all the elements that I love; physical presence, cunning, strategic planning, tactical perfection, statistical tendencies, competitive analysis and the willingness to lay it all on the line.

Football emulates life. Most, if not all, the elements described above are used daily and in many aspects of life. Getting a job, marketing, selling, politics, courting and even mating requires sophisticated gamesmanship.

I’ve watched and played football since I was a kid and my mind has been groomed to pursue every endeavor as if I were on the gridiron chasing the pigskin. It has served me well over the years but there is a downside.  It would be nice to just be able to disengage the brain, relax and enjoy life without auto-thinking the next conquest. It’s seems impossible to retrain an old brain. It’s a kill or be killed world.

An aging body can no longer play the sport but some smart football-minded person invented a new game called Fantasy Football for the physically unable to perform. After ten years of trying, I’m proud to say that the title of champion is mine.

The first game of the 2012 regular season is on the TV as I’m writing this post. American football is brutal, exciting, glamorous and defines our warring culture. It epitomizes who we are.

It’s a sickness but I love it. Go Pack Go!

Does George Will have Glen Beck Envy?

George Will must think he’s losing readership share to Glen Beck. He has evidently decided that he needs to go deeper into conspiracy-theory-land to try to win his readers back. In his column in the March 7, 2011 issue of Newsweek titled, “High Speed to Insolvency: Why Liberals Love Trains”, George says, “…progressivism’s aim is the modification of other people’s behavior.” and “the real reason for progressives’ passion for trains is their goal of diminishing Americans’ individualism in order to make them more amenable to collectivism.” Wow.

Part of me wants to say, “Oh my gosh! George Will has found us out! We progressives will have to look up from our evil plans and think of a way to go deeper undercover while pretending to care about the future of the human race as a cover up!” But of course, sarcasm lands like a belly flop on the ears of a man who uses “word-of-the-day” toilet paper.

So, George (aka Pokey), let me see if I can help you out with a couple of things while keeping this on a level that you and your pal Gumby can understand. There are two types of individualism in America – real and fake. Progressives want real freedom and real individualism, while laissez-faire capitalists want fake. Real individualism is in thought, expression, love, and other highfalutin’ concepts like these. Fake individualism is whether you drive a Chevy or a Volkswagen, whether you like the Steelers or the Packers, or whether you watch Friends or Desperate Housewives on T.V. These are individual choices, it’s true, but they represent individuality only at the most superficial level.

The freedom your kind wants is the freedom to dominate: the freedom to take full advantage of the fact that your great-grandfather bought stock in Standard Oil way back when or maybe the Union Pacific Railroad, whereas my grandfather came over from Italy, just before World War I, without a dollar in his pocket.

Progressives want the next generation and those that follow to have the luxury of individualism as well – not to be chained to a desk for sixty hours a week nor to be afraid to go outside because the air could kill a person. You see, George, individualism is closely related to freedom, and real freedom can be curtailed by fake freedom. Your freedom to make selfish, childish decisions like driving a giant SUV to the video store that’s 1/8 of a mile away on a sunny but pleasantly cool day interferes with your own grandchildren’s freedom to breathe outside without coughing. 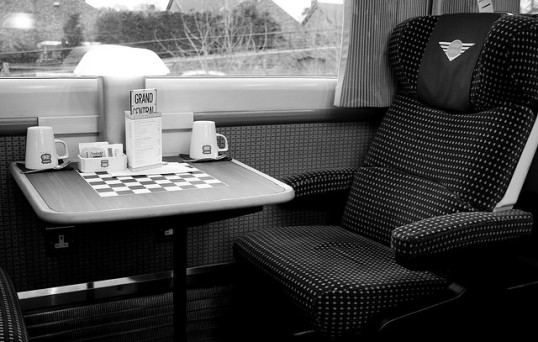 All that being said, I actually don’t like the high-speed rail plan either – but for sensible reasons – no conspiracies necessary. High-speed rail is not an urgent need in our society as it does not solve any current problems. What’s needed is a lot more and a lot better LOCAL public transportation. And, contrary to George Will’s Beckish rantings, this will mean MORE choices open to individuals, not less. George, like-minded pseudo-intellectuals, and overgrown children in general will still be free to pay 4, 5, or maybe even 10 dollars per gallon for gasoline, but those who would choose otherwise and would choose to try to provide a livable (and enjoyable) world for their grandkids will be able to do so.

Every day, individuals make choices between short-term and long-term preferences. Those of us who are blessed with common sense (most of America, I hope) make sacrifices today so that we may live longer, provide for our children, have some hope of future financial security. For example, most fathers might really like to buy a brand new Corvette but realize that, if they do so, their kids may not get to go to college or might not even have shoes to wear next month. As a society, we would do well to follow a similar program. Invest in things like public transportation now – suffer less from high gas prices, deteriorating roads, productivity-killing traffic, and the effects of pollution later. Trains get MORE efficient the more people use them. Can the same be said of cars? So maybe George is right. Progressives do want to change other people’s behavior – we want them to act like responsible adults who can see further ahead than their next purchase at the department store.

You see, George, it’s like this: Your freedom to spit on someone is in direct conflict with that person’s freedom and right not to be spat upon. I conclude from this that freedoms should be prioritized. For example, I fully support, without hesitation, your freedom to write ridiculous nonsense and to publish it as you are able. As is often said, in America, you have the right to be wrong. I believe this because I realize that my individual preference not to hear the blather of a mentally and morally deficient snob pales in comparison to my preference to live in a society that values and protects free speech. Likewise, I prefer to live in a world where my tiny nieces and nephews have a good chance at a healthy, secure future over a world where my own generation indulges consumptive gluttony.