Archive for the tag “Muhammad Yunus”

Banker to the Poor

In earlier posts, I shared a number of books on micro-lending. I want to share with you another important one I just finished. Banker to the Poor is authored by Dr. Muhammad Yunus who is seen by many as the first initiator of such a system.

Dr. Yunus is a professor of economics. He studied at the Vanderbilt University in the US before returning to Bangladesh and slipping into life as a professor. But in 1974, a famine ravaged the country, sending millions of rural Bangladeshi to the cities to beg on the streets.

“What good were all my complex theories when people were dying of starvation on the sidewalks and porches across from my lecture hall?…. Nothing in the economic theories I taught reflected the life around me.” 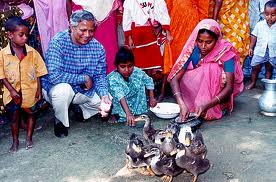 Dr. Yunus began to experiment with what we now know as micro-lending and lent $27 to 42 women who could buy bamboo to make and sell stools. This was the first step that a few years later saw the creation of the Grameen Bank. He created a system whereby loan recipients were grouped into cohorts of five. Only two of the five received their money up front. As soon as they were paying back their loans, the other three received theirs. Yunus sought to create more than individual business initiative, he sought to create a community of entrepeneurs who gave each other support. 97% of loan recepients repaid their loans.

Today the Grameen Bank is a $2.5 billion banking operation in Bangladesh. The micro-lending model has spread to over 50 countries worldwide, including the U.S. to Papua New Guinea, Norway to Nepal.

Dr.Yunus continues to  travel around the world spreading the belief that poverty can be eliminated: “…the poor, once economically empowered, are the most determined fighters in the battle to solve the population problem; end illiteracy; and live healthier, better lives. When policy makers finally realize that the poor are their partners, rather than bystanders or enemies, we will progress much faster that we do today.”

This book is a great read, particularly the first half, where Dr. Yunus shows his personal evolution into this idea as well as his life in the US as Bangladesh goes through its political upheaval. He shows a passionate love for his country and great courage in his willingness to offer the loans to women, who were held back by tradition and strict male domination.

In 2006, Dr. Yunis was recognized for his life’s work and awarded the Nobel Peace Prize. This could be seen as recognition not just an award for the work of a visionary, but recognition that there is a sustainable solution to empower people to lift themselves out of poverty. I’ve never met Dr. Yunis, but I bet he also sees it this way.