First a confession: I spent most of my life living in two countries where the drinking age is 18. I believe it should be like that here. I went to pubs in England from the age of 15 and, as long as we behaved and drank responsibly, we were tolerated. We did drink responsibly, reserving our focus for debates about politics, justice and women. 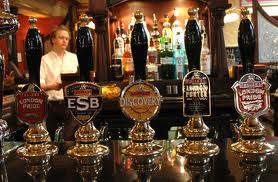 Second, when my sons go to a bar and order their first drink, I want to be there. I want to treat them and I want to be a part of their rite-of-passage. If they are 18, I might be able to slip this in before they leave home. If they are 21, there is less chance.

I enjoy my beer (a stout if you’re ordering), Johnnie Walker Black, and wine. I was always the designated driver (first kid with a driving licence and a mother who gave me access to her car) and before I was given the keys, I was warned about drinking by parents who cared.

I work with students and I see the intense pressure they are under to drink. I see the repercussions of over drinking and the guilt and damage that follows. They choose to imbibe, but we as a society allow them, as teenagers, to build an everyday experience into a mythical and dangerous campus ritual. Over-drinking and driving, sex or drug experimentation bring life-destroying trauma and damage.

So I was pissed (there’s a pun there if you speak the Queen’s English), when I saw that Urban Outfitters decided to market a new line of t-shirts just in time for young women filling their wardrobes before a new academic year with messages that encourage drinking and is modelled by young women who are quite possibly under drinking age. 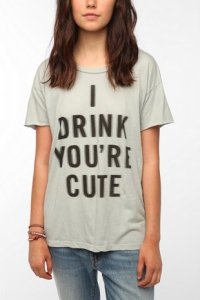 How Old Does She Look?

These so-called cool and humorous messages are no joke. In fact, they reflect a reality that alcohol use is associated with increased rates of sexual activity for teens as well as decreased condom use.

A just-published survey showed disturbing results including one out of five teens is drinking, using drugs, or smoking during school hours. Urban Outfitters know what they are doing. Most of their customers are between 18 and 24 and the second largest demographic is under 18.

Their stores will be flooded with young women buying their T-shirts and Urban Outfitters will make plenty of money. But profit doesn’t allow you to sleep at nights and I hope those who made this ruthless decision to market such a message come to realize what they have done and change it.

And if the high-ups in the company are awake in the wee hours, tossing and turning, maybe turn on the news or open a newspaper. You might find stories that will give you nightmares, but the reality is, most of them will not even be reported. And you will be too busy anyway drooling over your stock portfolio and how you plan to spend your bonus.