Voter ID Laws: A ‘Solution’ to the ‘Problem’ of Democracy

Last week, a federal judge in Wichita gave the green light to laws in Kansas and Arizona that will require proof of citizenship to vote in state and local elections, a move likely to spread to other states controlled by Republicans.

This is another example of a “solution” to a non-existent problem—there is little evidence of in-person voter fraud or non-citizens voting.

The “problem” that the Republicans want to “solve” is democracy—the constitutional right of every citizen to vote. These voter ID rules will make it harder for the poor, minorities, and students—citizens more likely to vote for Democrats—to register and vote. That’s exactly their intention.

Defenders of these rules say it’s no big deal—“Americans uncomplainingly present identification for getting on airplanes and numerous other things,” (New York Times 3.20.14) What they don’t say is that the poorest of our citizens never fly. And many do not have picture IDs. Or access to their birth certificates.

I’m no expert on voter suppression, but I did a learn a great deal about it researching for my recent novel, Bones in the Wash: Politics is Tough. Family is Tougher, which is set during the 2008 presidential campaign in New Mexico. Here’s a passage from the book.

“You look at the news and what people talk about and you get the impression that the nitty-gritty of politics is the people running, their characters, their positions on the issues, and of course, that’s partly true. But underneath that is this whole business of setting rules, like who can vote and when, and the Republican are evil genius and meta on that front. I hate it that I actually admire what they did even as I despise it. If they can manipulate the rules so it’s harder for the poor and young and old and disabled to vote, then they have an advantage no matter how weak their candidate is.”

That’s a fictional person speaking, not a real one. Sierra León, one of the novel’s protagonists. Here’s more from her:

“When we call them on it, they say, oh, it’s partisan attacks. That’s what’s so infuriating about politics. There’s no impartial referee, like at debate club in high school, some thoughtful observer who says, well, you may have received more votes here, but you broke the rules, so we’re going to have to subtract points. The right does whatever it wants, rules be damned. Well, that isn’t quite true. They do try to change the rules, but when they can’t, they break them.”

I made the characters up, and the story, but not voter suppression. That is, unfortunately, real and growing. Here’s the Center for American Progress:

The right to vote is under attack all across our country. Conservative legislators are introducing and passing legislation that creates new barriers for those registering to vote, shortens the early voting period, imposes new requirements for already-registered voters, and rigs the Electoral College in select states. Conservatives fabricate reasons to enact these laws—voter fraud is exceedingly rare—in their efforts to disenfranchise as many potential voters among certain groups, such as college students, low-income voters, and minorities, as possible. Rather than modernizing our democracy to ensure that all citizens have access to the ballot box, these laws hinder voting rights in a manner not seen since the era of Jim Crow laws enacted in the South to disenfranchise blacks after Reconstruction in the late 1800s.

The rapid growth of these Voter ID laws and bills is no accident. The American Legislative Exchange Council, better known as ALEC, funded by the Koch brothers, WalMart, and their ilk, have written a model bill and have been shopping it around, especially to those Republican-controlled states.

The gist of the bills is simple enough—people need picture IDs in order to vote. Now for your average middle-class person who travels, who has a drivers license and credit cards, this may not seem like much of a hurdle. But according to the Brennan Center for Justice, upwards of 20 millions Americans have no picture ID. And it’s no surprise those people are disproportionately poor, old, young, and minority. Fortunately, most states do not require photo IDs.

It’s not that voter fraud has never happens, but it’s extremely rare. Most cases turn out to be clerical errors. The Bush administration searched high and low to find cases to prosecute and came up with fewer than 100 charged defendants in three years.

What the right has succeeded in doing, however, is repeating these voter fraud accusations enough, through Fox News and the like, that a large number of people think it’s real. Enough so that ACORN, an organization that advocated for poor people and registered voters, got run out of business in 2010. But, according to a PPP poll two years later, after the 2012 election, 49 percent of Republicans said ACORN stole the election for President Obama. (Forty-nine percent of Republicans think thing that doesn’t exist stole election for Obama)

These voter suppression attempts are happening in concert with the arguably more nefarious campaign to portray government as bad, explicitly implying that that it doesn’t matter what you do or who you vote for. Unfortunately, there is some truth to that, but it’s also a self-fulfilling prophecy. Hey, the government is broken, it can’t do anything. Oh, and pay no attention to the men behind the curtain who are hacking at the government with picks and axes.

(My intention in Bones in the Wash was to highlight the increasingly common attempts by the Republicans to make it harder for people to vote, but it’s less a political tract than a family novel, full of crazy parents, insensitive boyfriends, demanding girlfriends. A murder investigation, too.)

New Author On The Block

My friend, John Byrne Barry has a novel coming out. John is a political activist and has channeled this passion into fiction. We bonded through a shared aspiration to help inspire people to act through affiliation with characters who fight for social justice.

Perhaps you can join me at John’s book launch on Sunday at the Mo’Joe cafe in Berkeley – I can attest to the good coffee and healthy Middle Eastern food. 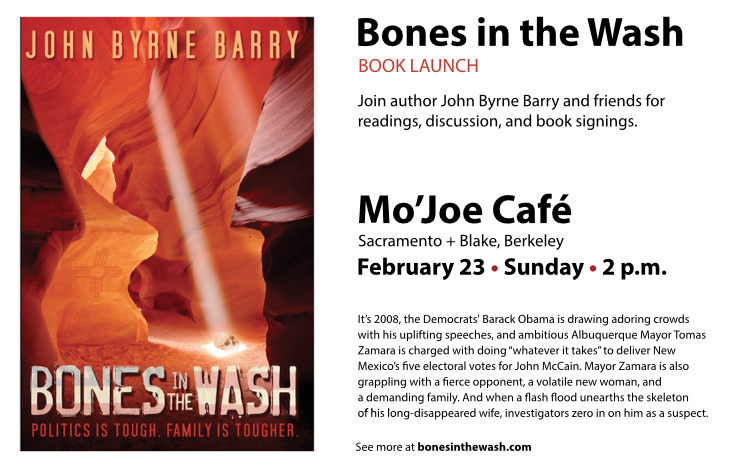 Alon Shalev is the author of the 2013 Eric Hoffer YA Book Award winner, At The Walls of Galbrieth, The First Decree, and Ashbar – Wycaan Master Book 3 – all released by Tourmaline Books. Shalev is also the author of three social justice-themed novels including Unwanted Heroes. He swears there is a connection. More at http://www.alonshalev.com and on Twitter (@elfwriter). Hang out with Alon on Google+