Archive for the tag “jesus”

May You Have a Peaceful Christmas – Tom Rossi

Whether you believe that Jesus was the son of God or not, or whether you think that God even exists or not, or wonder if He has a form not described well at all by our religious dogmata (my own head has been full of blasphemous questions on these subjects since I was 5), I think it’s hard not to agree that Jesus had some pretty good things to say.

Today, we celebrate the birthday of that ancestral hippie who has had so much effect on our world. One of the many things that has made me admire him quite a bit was his, let’s just call it “advocacy,” for peace at various scales.

On the website christiansforpeace.org is their statement: “It is inconceivable that Jesus would support war.” This is followed by several Bible citations which support the general idea that Jesus was a man of peace, and wanted us all to be, as well.

I’m not really a hardcore pacifist. As I’ve written before, I think that military action is necessary when someone like Adolf Hitler is wreaking havoc on an entire continent. I also think there is nothing wrong with defending yourself or another person against an attacker.

Even this might be inconsistent with the teachings of Jesus Christ, but might line up OK with the part that matches part of the Hippocratic Oath: First, do no harm.

I don’t want to get all preachy, here, about the hypocrisy of Christians who favor bombing people in faraway lands or executing criminals, but I ask all of you out there – please let today be a day where peace lives in your hearts.

Merry Christmas. And to all of you out there who celebrate some other holiday, my most sincere best wishes for the holiday season.

“And suddenly there was with the angel a multitude of the heavenly host praising God and saying: ‘Glory to God in the highest, and on earth peace, goodwill toward men!'” (Luke 2:13, 14).

Christopher Moore – As Left Coast As They Get

When Christopher Moore offers a book signing in San Francisco, people flock to hear and meet him. When he launched his last novel, Fool, more than 300 hundred people lined up around the perimeter of Books Inc eager to have him sign copies of their books or to exchange a word. I had gone hoping for a little chat…some chance!

But Moore didn’t become a cult hero in San Francisco because of his parody of Shakespeare (Fool) or even the book that launched him, the irreverent and hilarious tale at the first 30 years of Jesus’ life (Lamb). What has enabled Moore to gain such status here are his three books about vampires in San Francisco. 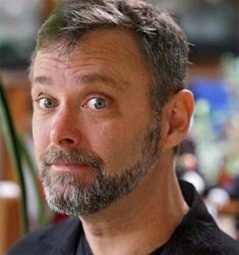 The Man – as funny in person as on the page.

Please don’t bother if you want to be terrified, or if you seek Stephanie Meyer romance. Christopher Moore wrote the book (excuse the pun)  on how to create characters, bind them to a city, and have people begging for more. This is why I chose to write about him during California Writer’s Week and on Saturday for my “Writer’s Corner.”

At the book launch that I just mentioned, the questions were not about either his latest book or Lamb, it was all about the books that bound him to our city, and why we claim Christopher Moore as one of our authors, even though he lives in SoCal.

A Dirty Job, Bloodsucking Fiends – A Love Story, and (after he released Fool) Bite Me, all contain three vital ingredients: a vivid city, engaging characters, and that extra ingredient – in Moore’s case, his wicked sense of humor.

With such a combination, Christopher Moore came up from Santa Barbara and conquered the heart of our fair city. He deserves his place in my California’ Writer’s Week.

Let’s talk truth. When it comes to the environment, Christianity, Judaism and Islam have failed miserably. These monotheistic religions are not overtly hostile toward the environment but they place humanity in an elitist position, thereby relegating all else to servitude.

Prior to the rise of Judaism, Christianity and Islam, mankind worshipped many gods with a significant portion dedicated to mother earth. The so-called pagan religions respected nature and, in turn, help protect the environment. Then along comes the big three monotheistic religions—endorsing man’s entitlement over all things earthly—and the entire ecosystem begins to progressively deteriorate.

Man has forgotten how to work with nature and now pushes against her, consuming a lot of energy in the process. We are so out of control that we use 10 fossil fuel calories to produce one calorie of food. These fossil fuels—in the form of pesticides, fertilizers and desiel—have turned the soil barren and the skies brown. Take a shovel to any industrialized farm and turn over the dirt. You will not find anything living; no worms, no ladybugs and no beneficial bacteria. It’s all dead. Plants will only grow with more fertilizer and more pesticide—death breeds death.

It’s odd that these three faiths would have such little respect for all creatures and earthly elements when one considers their origin. Christianity, Judaism and Islam are all derivatives of Zoroastrianism. Yes, that’s right, Zoroastrianism is the first monotheistic—one god—religion dating back to 2000 BCE or 4000 years ago.

The three prevailing “one almightly god” religions are fundamentally the same and, for all practical purposes, just copy-cats of Zoroastrianism. However, Zoroastrianism has one major difference. From its inception, it preached ecology and care of the environment with respect and reverence for nature. Zoroastrians must protect the sky, water, earth, plant, animal and fire. At the end of times, when “all things” are harmonious, mankind must give the world back to God in its original perfect form.

The eco-friendly beliefs of Zoroastrians are in stark contrast to the trivial considerations Judaism, Christianity and Islam gives to nature. Imagine what the world would be like today if these three religions also copied the environmental aspects of the original “one god” religion.

Perhaps we need a Zoroastrian revival.