Archive for the tag “hoodie”

Focus On The Real Issue

What is it with the American press, politicians and the rest of us! Why are we able to discuss every aspect of an issue except the core problem or conflict. I am guilty too. On Monday, I chose to focus on Congressman Rush getting kicked out of the House and even turned to my most trusted source, John Stewart on the The Daily Show. 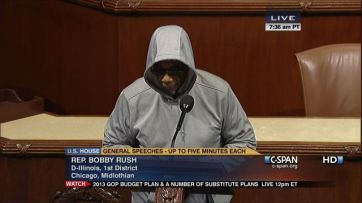 Congressman Bobby Rush in the House

Mr. Stewart actually isn’t as guilty as the rest of us. He makes his living though satire (and does it exceedingly well, I might add). He is permitted to comb any situation and find a humorous angle to highlight. The rest of us shouldn’t.

It sometimes needs a quality journalist or social commentator to remind us of this. Thank you, Gail Collins for reminding us. Her op-ed in the New York Times, More Guns Less Hoodies, was excellent, and though I am going to lift a few choice paragraphs, her article is worth reading right through.

This is not about the right to wear a hoodie. The hoodie is nothing more than a symbol for racial profiling. “Just because someone wears a hoodie does not make them a hoodlum,” a hooded Congressman Rush stated before being served a double technical and sent for an early showers.

Ms. Collins: “This is pretty much par for the course. Whenever there is a terrible shooting incident somewhere in America, our politicians talk about everything except whether the tragedy could have been avoided if the gunman had not been allowed to carry a firearm.

“You would think that this would be a great time to address the question of handgun proliferation, but it has hardly come up in Washington at all. This is because most politicians are terrified of the National Rifle Association. Also, the small band of gun control advocates are busy with slightly less sweeping issues, such as their ongoing but still utterly futile effort to make it illegal to sell a weapon to anyone on the terror watch list.”

But there is little discussion about gun control. Ms. Collins has argued gun control in the past and admits to feeling jaded. Many people just accept that there are certain interest groups that are untouchable. They are so well funded, so well organized, that they are simply impervious.

Ms. Collins chooses to highlight the discussion on carrying guns legally between states. If you have a license in one state, you can take it into many others. Ms. Collins concedes that anyone can walk with his gun around Time Square and many other vulnerable sites packed with citizens. In a country that has instituted many laws curbing citizen’s rights in the name of Homeland Security, this is patently absurd. 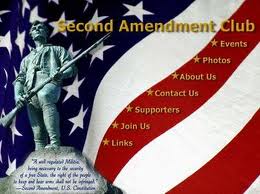 I am new to the topic of gun law. There is something far deeper in the American psyche that I, as a relative outsider, am having trouble  grappling with. As left as my politics go, I am keenly aware of the danger of terrorism and willing to have some of my rights curbed for what is, ultimately, the protection of my family, community and myself.

But this is the same reasoning that doesn’t want almost anyone to walk around thinking he has the right to take a life in anything but the clearest scenario of self defense. We have one police force. They are trained and clearly defined by uniform and procedures. They might not be perfect and we might want to demand improvements and more policemen and policewomen on the streets, but this is the nature of democracy.

Last week, Illinois Rep. Bobby Rush, a Democratic Congressman, was ordered to leave the House chamber because he was dressed inappropriately. Rush was wearing a hooded sweatshirt in honor of Trayvon Martin.

The Congressman stood and commenced his speech in a suit jacket, but removed it revealing a hoodie underneath. “Racial profiling has to stop,” Rush said. “Just because someone wears a hoodie, [it] does not make them a hoodlum.”

It’s against House rules to wear headgear in the chamber.

I want to tip my hat (or other headgear) at Congressman Rush – he had a point to make and the use of props (not unknown in the house) made it all the more prominent – hit the TV shows and even gave the Congressman his deserved debut slot on Left Coast Voices.

Check out the clip from The Daily Show – sometimes satire is work a thousand blog posts.