Archive for the tag “graffiti”

Adam Mansbach’s work is not jut a pleasure to read, he is a great author to listen to. Adam is the author of two novels:

Angry Black White Boy is an amazing race ride – in a New York cab. It tells of a white boy who moves to New York and works as a cab driver to support himself through college. He is consumed by the hip hop culture and yet, as white boy, he is straddling two worlds.both of which treats him as an outsider. Consumed by guilt of white privilege, he begins robbing white customers. The authorities and media think the criminal is a black man and…well I’ll leave you hanging there.

The End of the Jews is not your average inter-generational insight into one culture, whether Jewish, Italian etc. What stands out here are the totally believable characters. This is a novel where the characters stay with you long after you’ve finished it. I read this book about a year ago, and there is one scene that has stayed crystal clear in my mind. Imagine a young American connecting with his Eastern European grandfather over spraying graffiti. I’ll leave you there. 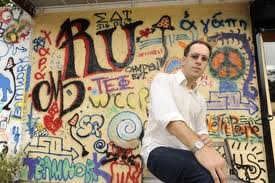 If ever you have the opportunity to hear Adam speak, it is worth it. Hip hop oozes from him, so when he addressed the Berkeley Writer’s Group a year ago, as he got excited, he spoke almost in an unconscious rap beat. I wish I had recorded him, not only for this, but for the valuable and honest knowledge he shared with the group. Here is a taste of what I mean.