Archive for the tag “Give Global Warming warmer world”

Like many kids growing up in the 60s and 70s, I wanted to be an astronaut. Perched atop a metal tube filled with mega-amounts of explosives, blasting through space would have been an awesome experience. Putting on high-tech gear and floating around an Apollo capsule like Will Robinson hovering above the Jupiter 2 in Lost in Space was every boy’s dream.

My astronaut wishing days are well behind me but, in the coming years, there will be a terrestrial need for space-like attire. So, at least, I may finally get to dress like an astronaut. 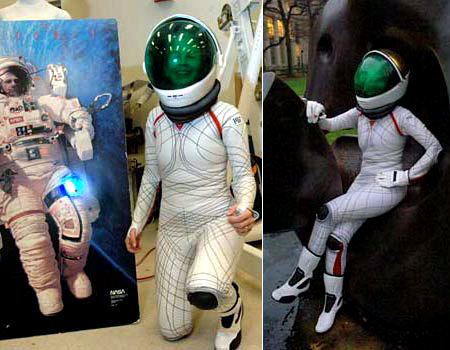 A few months ago I wrote a piece called Give Global Warming a Hug. This was written because we need to embrace the fact that a hotter world is here to stay for a long time and it’s going to get worse before it gets better. And the “better” will not come until humans are extinct. One of the closing lines in the hug piece was, “We need to spend our intellectual energy creating an economy that allows us to survive and prosper in the chaos of a warmer world.” Climate change will create new markets. One of the products introduced during the Warm World Economy will be a Terrestrial Environmental Suit or TES. Resembling a space suit, it will control temperature, humidity and have many other bells and whistle for comfort and entertainment.

The TES is a product of necessity for two primary reasons; sky-rocketing energy cost and the need for humans to navigate their daily existence in a hotter climate. We will soon be a world of 9,000,000,000 (nine billion) people on an already energy stressed planet. All fuels are expensive now and will exponentially increase in the future. The luxury of having cooled spaces in our cars, homes, stores and offices is energy intensive and will soon be economically unsustainable. There is no need to control the climate inside all these big spaces. We only need to manage the space immediately around our bodies and doing so will save tremendous amounts of energy.

So, wal-lah or Viola…expect a climate controlled Terrestrial Environmental Suit in stores near you soon!

Finally, after forty years I’ll get my space suit.