Archive for the tag “french fries”

So it is well known that if you want to sell a book, get attention for a blog or an article, then you do or say something controversial. Some do this intentionally, others by mistake (we often call the latter – politicians). Hey, I even blogged about one yesterday.

Now Amy Chua is a Yale law professor, having studied at an impressive number of other Ivy League schools. We can assume she is smart. She is also from the Bay Area, so there is no problem with her credibility.

We can also assume that when she published her book “Battle Hymn of the Tiger Mother” which essentially states that Chinese mothers are better than American mothers, then she knew that she just might strike a cord with a large and rather proud section of the population. In case you think I jest, read this – the title is “Why Chinese Mothers Are Superior.” Need I say more?

Now given that 70% of those who buy books are women and many of those possibly mothers, you can’t help but be impressed that her book sits atop most bestselling lists.

I haven’t read the book, but I hope it is as entertaining as the arguments and accusations that are flying around the Internet and even in those more serious newspapers.

I suspect there is a lot more behind how and why Chinese mothers (and fathers) bring up their children that is a reflection of their society. A friend of mine is US born and married to a Chinese woman. They have raised a daughter who, from what he tells me, is an example of achievement and excellence. You can read his responses at his blog: I Look China.

Without making any claim to having knowledge on the subject, I suspect we are a product of our society and our religion. My parents molded me with a hybrid of English/Jewish. I therefore eat chips – that’s freedom fries here -with a fork and am losing a battle to get my boys not to use their fingers. However, since I was also raised by Jewish parents, at least I still have the guilt up my sleeve. 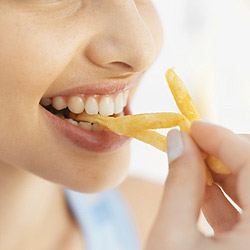 Actually, I believe Amy Chua is married to a Jewish man, so her kids have challenges of their own. Two parents who are Ivy League professors and lawyers to boot, one Jewish, the other Chinese American – well I ain’t rooting for the Chinese or American moms.