Archive for the tag “Founding Fathers”

I realize that I have become rather obsessed with the topic but I will try and make this the final post for a while. I have a feeling that I know on what social issue the next novel will focus.

Sifting through the material that I collected are five more excellent articles regarding gun control that have appeared in the Atlantic.

This is the final part of a series from last week based upon a great article from The Atlantic by Adam Winkler – The Secret History of Guns. In the previous post, we discussed how the NRA have taken roles in the past to support gun control policy.

There are other historical examples of the NRA supporting gun control. In the 1930’s, the NRA endorsed the National Firearms Act of 1934, aimed at stemming the distribution of “gangster guns” like semi-automatic and sawed-off shotguns.

The NRA was not a blond supporter, objecting to including handguns, for example, but supported what Frederick defined as “reasonable, sensible, and fair legislation.”

In the aftermath of the tragic assassination of President John F. Kennedy in 1963 the NRA again supported gun control. The assassin, Lee Harvey Oswald, had purchased his gun from a mail-order advertisement in the NRA’s American Rifleman magazine. The NRA’s Executive Vice President, Franklin Orth, testified: “We do not think that any sane American, who calls himself an American, can object to placing into this bill the instrument which killed the president of the United States.”

The NRA did not favor stricter proposals such as a national gun registration, but did support the Gun Control Act of 1968.

What we learn from this historically is that the NRA and Republicans in general, do not have to automatically fight every attempt at gun control.

The US Supreme Court in 2008 clearly defined the Second Amendment as guaranteeing the rights of the individual to bear arms. However, Justice Antonin Scalia, pulled on this past realism when he wrote: ” should be taken to cast doubt on longstanding prohibitions on the possession of firearms by felons and the mentally ill, or laws forbidding the carrying of firearms in sensitive places such as schools and government buildings, or laws imposing conditions and qualifications on the commercial sale of arms.”

While the Founders did impose their own form of gun control, no law of their design compares to Scalia’s list of Second Amendment exceptions. “They had no laws banning guns in sensitive places, or laws prohibiting the mentally ill from possessing guns, or laws requiring commercial gun dealers to be licensed. Such restrictions are products of the 20th century. Justice Scalia, in other words, embraced a living Constitution.”

Ironically, in this lies our hope for a consensus. If Justice Scalia sees the need for limitations, then he is only following a long line of conservative, responsible thinks that include leaders of the NRA, Ronald Reagan and the Republican Party, and maybe even the Founding Fathers. 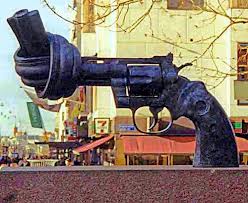 Secrets of Gun Control 2 of 3

This is a continuance of Monday’s post based upon a great article from The Atlantic by Adam Winkler entitled The Secret History of Guns.

Hard-line gun-rights advocates portray even modest gun laws as infringements on that right and oppose widely popular proposals—such as background checks for all gun purchasers—on the ground that any gun-control measure, no matter how seemingly reasonable, puts us on the slippery slope toward total civilian disarmament.

From the other side of the street, those who advocate for gun control, claim that the Second Amendment was intended to insure a militia that could protect the people from interior or exterior threats.

We  will never know the intentions of those who wrote the constitution, but what is historically proven is that the Founding Fathers put into place gun laws and limitations that would probably see their NRA membership revoked today.

True, preventing slaves and free blacks access to arms was clearly to uphold a racist regime, or law-abiding white men who refused to swear loyalty to the Revolution, is hardly the kind of gun control that many of us seek. (I couldn’t find if women were allowed to carry arms, and if not then, when. Anyone know?).

What I also found interesting is that the Founders had their own version of “individual mandate” (and I thought you were being original, President Obama with your health-care-reform law). The Founding Fathers “actually  required the purchase of guns. A 1792 federal law mandated every eligible man to purchase a military-style gun and ammunition for his service in the citizen militia. Such men had to report for frequent musters—where their guns would be inspected and, yes, registered on public rolls.”

After a famous public altercation in February 1967 (in Oakland, Left Coasters) between a lawyer for the Black Panthers and a police officer, “Republicans in California eagerly supported increased gun control. Governor Reagan told reporters that afternoon that he saw “no reason why on the street today a citizen should be carrying loaded weapons.” He called guns a “ridiculous way to solve problems that have to be solved among people of good will.” In a later press conference, Reagan said he didn’t “know of any sportsman who leaves his home with a gun to go out into the field to hunt or for target shooting who carries that gun loaded.” 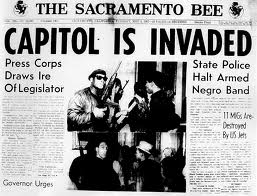 While the NRA is the clear leader against gun control it was not always so intransigent. In fact, throughout the 1920’s and 30’s the organization often led gun control legislative initiatives.

“The organization’s president at the time was Karl T. Frederick, a Princeton and Harvard-educated lawyer known as “the best shot in America”—a title he earned by winning three gold medals in pistol-shooting at the 1920 Summer Olympic Games. As a special consultant to the National Conference of Commissioners on Uniform State Laws, Frederick helped draft the Uniform Firearms Act, a model of state-level gun-control legislation.”

1. No individual could carry concealed in public without a permit from the local police. Such a permit could only be received by a “suitable” person with a “proper reason for carrying” a firearm.

2. Gun dealers were required to report to law enforcement every sale of a handgun.

3. A two-day waiting period on handgun sales was to be strictly adhered to.

In 1934 Frederick stated that he did “not believe in the general promiscuous toting of guns. I think it should be sharply restricted and only under licenses.” Milton A. Reckord, the organization’s executive vice president told a congressional committee that the NRA was “absolutely favorable to reasonable legislation.”

On Monday, we shall see how the NRA continued to be an active partner in the passage of gun control.

All I Want For Xmas Is To Reform Congress

“I could end the deficit in five minutes,” he told CNBC. “You just pass a law that says that anytime there is a deficit of more than 3% of GDP, all sitting members of Congress are ineligible for re-election. The 26th amendment (granting the right to vote for 18 year-olds) took only 3 months & 8 days to be ratified! Why? Simple! The people demanded it. That was in 1971…before computers, e-mail, cell phones, etc. Of the 27 amendments to the Constitution, seven (7) took 1 year or less to become the law of the land…all because of
public pressure.”

Given the connections created through the Internet, it shouldn’t take long for everyone in the US to read and get behind this concept.

1. No Tenure / No Pension. A Congressman collects a salary while in office and receives no pay when they are out of office.

3. Congress can purchase their own retirement plan, just as all Americans do.

4. Congress will no longer vote themselves a pay raise. Congressional pay will rise by the lower of CPI or 3%.

6. Congress must equally abide by all laws they impose on the American people.

7. All contracts with past and present Congressmen are void effective 1/1/12. The American people did not make this contract with Congressmen. Congressmen made all these contracts for themselves. Serving in Congress is an honor, not a career. The Founding Fathers envisioned citizen legislators, so ours should
serve their term(s), then go home and back to work.

What this act would suggest is that congressmen and women are part of our society, not above it. How can they manage a health plan, pension or social security, when they do not participate in the model? How can you understand the fear and uncertainty regarding the job market when you sign on to a gravy train?

Probably a great guy to hang with in a cafe

My favorite line is: Serving in Congress is an honor, not a career. It is an honor to be entrusted by the people with such responsibility. It is time Congress acknowledged and respected this honor.