Archive for the tag “extremist”

Not even close. This was a timid, cautious choice – a hedge intended to make it OK for Tea Party extremists to vote for the wet dishrag that is Mitt Romney. Mitt was afraid that Tea Partiers would just stay home… a ridiculous fear as the one thing that unites them is their visceral, misguided and misdirected hatred of President Obama.

This was a strategic calculation and a poor one. Not one Tea Party member would have failed to vote for Mitt. But now he’s put himself in jeopardy with that all-important voting demographic – those with more gray hair than Romney. 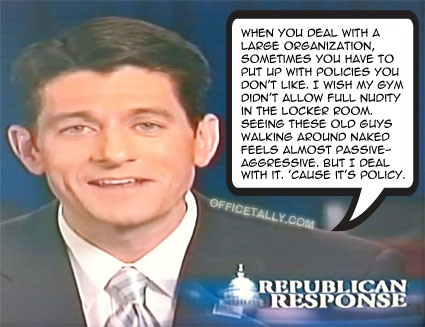 Paul Ryan is a cutter. He wants, above all, to keep taxes low for the very wealthy. The way to do that is to cut. So he wants to cut medicare, social security, education, and lots of other things. Some of these programs are the life blood (in some cases literally) of America’s vast army of retired persons. I won’t even call them “the elderly” because this group is far larger and includes many more people than that.

So, I have some renewed hope that our so-so president will be re-elected in November. So-so beats narcissistic classist any day of the week.

Representative Barney Frank said that Mitt Romney has no actual values, other than faith in himself. In other words – narcissism. This timid choice makes that clear. He doesn’t care if his running mate shares his views (after all, they change every day and in front of every audience), but only if that person will help him win.

This word, “bold,” seems to be the plant word of choice for Republican press releases (that are often disguised as news stories). Just replace it with “expected,” or “mundane,” or “slimy,” the next time you hear it and it will all make much more sense.