Archive for the tag “conspiracy theory”

As an environmentalist who drives around in a car for 2-3 hours a day, I hold my hand up and admit my hypocrisy. My job requires a car and I can justify why my family lives in one place and I work in another with a big city in between. I have made it my space – audio book, coffee, snacks – between the intensity of work and the push to get the children’s homework finished, I have a little space just for myself.

We have discussed the electric car on this blog a few times and the conspiracy theory that it is big business and oil conglomerates that have kept us pumping oil into our cars instead of cheaper, more sustainable alternatives.

Eyal Aronoff, co-founder of Fuel Freedom Foundation, fascinates me. An Israeli who is deeply committed to the US, a country that gave him everything, he is spurred by the tragic loss of two family members in the 9/11 attacks. He believes that it is not a question of technology, but politics  and it is a politics that makes the US globally vulnerable, the world choke on pollution, and keeps a small elite rich while the rest of us pay a heavy financial price.

“He finds that the lack of alternative energy sources to fuel our vehicles jeopardizes U.S. national security, bankrupts our economy and forces us to pay more at the pump. Alternative fuels, such as ethanol, methanol, natural gas and electricity, are the immediate solution to ending our nation’s oil dependency.”

“The Fuel Freedom vision seeks to reignite the American dream by encouraging competition and sparking innovation.” For more information, check out http://www.fuelfreedom.org/get-involved to understand more.

I am beginning to wonder whether it is an addiction issue. There are better models of life out there and yet many of us continue to smoke, drink, take drugs etc. Often, perfectly intelligent and functional people, make irrational decisions and build up a wall of excuses to justify it. Like the guy whose 2nd-hand smoke is killing his children and neighbors, our irrational addiction to oil is killing our planet, keeping many of us in poverty, and leading us into the next war.

It is time to kick the habit.

Admittedly, this post is being written before the end of election day, so there is still time for other states and polling stations to screw up. But Florida, really? Again? And Ohio: did anyone tell you that the whole nation is watching you?

Now I have organized big events, though nothing on the scale of an election for a state. I have also made mistakes, but I have tried to learn from them. Florida – you embarrassed us all in 2000 – could you not be bothered to learn something from it and try to improve your performance?

Already, accusations of fraud, misconduct, and six-hour waiting lines have dominated the news of electoral procedure from your state. Reports of voters (your employers) having to wait for several hours and cast their vote at 2.30am is not only intolerable, but abusive. 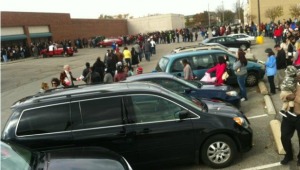 A line of early voters snakes around a parking lot at a voting location in Columbus, Ohio. (Michael Finnegan/Twitter)

Readers of Left Coast Voices know me for a man who doesn’t need too much encouragement to entertain a juicy conspiracy theory, but it is either considering electoral tampering, or gross mismanagement on a scale that is harder to swallow than Area 51.

It is not just the people on the ground who oversee the complicated process of facilitating a line of voters who put a cross on a piece of paper fold it and put in a slot…and then counting them afterwards. It goes right up to the top of their organization, no doubt led by people who hold degrees in organizational management and earn a good salary.

Perhaps we need to hand this task over to Event Planners. I attend a few conferences and weddings every year and they flow without a hitch. I know, an election is more complex, so take the best and brightest from the field. At least there is no drunk uncle making a toast or bridegroom having cold feet at the last-minute. 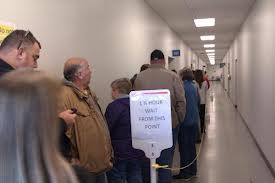 In fact, there is little that cannot be anticipated four years ahead. So Florida, Ohio et al: start planning now for 2016. If it truly is a matter of having the best organizational minds running the show, then do it. Democracy is too important to be abused and the voter is the foundation stone of democracy.

Alon Shalev is the author of The Accidental Activist and A Gardener’s Tale. His next novel, Unwanted Heroes, is due out in early 2013. He is the Executive Director of the San Francisco Hillel Jewish Student Center, a non-profit that provides spiritual and social justice opportunities to Jewish students in the Bay Area. More on Alon Shalev at http://www.alonshalev.com and on Twitter (@alonshalevsf).