Archive for the tag “C-Span”

It was not the setting where I would expect such a conversation. It was a Jewish philanthropy meeting and most of the people that I had addressed were there because they had money and were generous to the causes that moved them.

The meeting was over and we were drinking and eating around the buffet table when a well-dressed man approached me and asked whether students were involved with the Occupy movement.

What ensued was a discussion of the merits of the Occupy movement and the Tea Party. This man was a democrat and only used the Tea Party to illustrate a well-oiled machine – with money, a single message, and leadership. 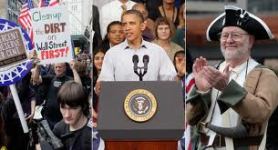 But then he turned his attention to the Occupy movement. He talked about the need for leadership and a clearly defined agenda. I was not looking for such a discussion, we have covered it considerably on Left Coast Voices – search occupy in our search engine – and I was wary of my role at this meeting. But he caught my attention with his next thought.

The window of opportunity is closing he said. Once the weather improves, we will not be able to hide behind this excuse. Then he mentioned the upcoming elections. It would be inexcusable, he said, if the Occupy movement did anything that hurt the Democratic drive for Congress and the White House. I have offered my thoughts on this here.

But I want to finish with this thought. He spoke about the one achievement (not sure that it has been fully realized) is that the banks now understand that they serve the people and need the people.

The next step, he said, was to apply this accountability to the politicians. In his work, this man evaluates and promotes or fires his employees. Why are we not doing this with Congress? Why should they care that their rating is a pathetic 11%? They do not hold unique skills and there are many who would be happy to take their places.

He would like to see a credible forum that evaluates the politicians, decides whether they achieved the goals we voted them in to do (or at least made a serious effort to do so), and give them a public grade. Anyone who brings in a low grade gets fired. Unlike his business, we have a legitimate and open opportunity to send politicians who do not perform home every four years.

I asked him whether there was an organization that did this. He replied that the only people he knows are the Tea Party.

Can we not build a broader base that offers more objective data to the 99%. There might not be much in the way of equality these days, but if 99% vote according to a performance evaluation, we will see a lot of new faces on C-Span, and they will be more aware that we are carefully watching them.