Archive for the tag “Bill o’reilly”

I’ve been wondering lately (okay, for many, many years) how people can still hold onto conservative ideas about the economy. Social issues are one thing – there is a legitimate debate about abortion, for example, but for some people, economics seems to be even more of a religious issue than that. People just hold onto their beliefs, despite a wealth (pun intended) of evidence to the contrary.

To track down some of the reasoning of the followers of the tired, old religion of conventional, “free-market” economics, I interviewed démodé economist Charles “Chipmunk” Griedesgud at the Gordon Gecko Center for Economic Satire in Slashington D.C.

Presented here are some highlights of the interview. The entirety of the interview will be published in book form by the same publishers that put out Bill O’Reilly’s weekly treasures. It will be called, Killing… something or other.

Me: Thank you for allowing me to interview you, Mr. Griedesgud.

Me: Fifth generation at Yale?

Me: Ha ha! I’m sure your cat didn’t see THAT coming! Oh… Ahem. The main thing I’ve been wondering about, Chip, is how people can still believe that giving corporations big tax breaks leads to more jobs. The corporations don’t seem to create jobs anymore; they just build factories overseas or buy robots to do the work. Don’t people know these things?

Chip: If we cut taxes on corporations, they will build factories and make jobs… in China and Mexico.

Me: How does that help us?

Chip: But then, you see, the Chinese and Mexican workers will become more affluent.

Me: Waiting for the good part.

Chip: …which will eventually allow them to make the commodities that are demanded by the newly affluent foreign workers.

Chip: So, it still trickles down; it just might go through a couple of extra steps.

Me: Wow. I can’t understand how I never thought of that.

Chip: I sense a little sarcasm in your voice.

Chip: Would you, instead, have no job creation at all? I mean, if we balanced things more toward the mythical “middle class,” then there wouldn’t be the concentration of wealth at the top that it takes to start the projects and businesses that do just that.

Me: But isn’t that exactly what happened between the 1950’s and the 1970’s, America’s greatest period of economic growth and shared prosperity? The progressive tax structure taxed the super-wealthy and their corporations heavily, and they all kept right on growing anyway, along with the well-being of their workers and the workers’ families.

Chip: That approximately three-decade period was essentially an illusion of economic bliss. In reality, the so-called “middle class” was stealing from the providers – the wealthiest Americans, who could have built a much LARGER economy, and created even more jobs. They did this through forming alliances known as “unions” and through other underhanded methods.

Me: So, what could we expect if we were to follow your prescription, which seems to be the way we’re headed, anyway?

Chip: Well, economic growth and prosperity, of course! Our economy could be growing like the Chinese! And why not?

Me: But won’t this scenario mean that those countries make the same “mistakes”, as you call them, that we made? And won’t they be hurting their economies?

Chip: Yes! That’s exactly what we want! There are two ways to look at winning a competition – you can perform better than the others, or they can perform worse than you!

Me: So, you say we could head into a period of fantastic economic growth and prosperity. But the “middle class” can’t share in that prosperity, lest they sabotage the whole process.

Chip: That’s exactly right. You asked me about the benefits before: the average income would rise beyond anything we’ve seen.

Me: But wouldn’t that just be a result of the outliers? Wouldn’t the income median and mode be dismally low? 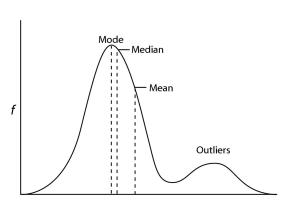 Chip: Well, thanks to years of effort, nobody knows what those even mean. We’ve trained people very effectively to think that averages are everything. We’ve kept telling them about the average income in America being so high and we even invented a term called “GDP per Person” that throws them way off. Complaining about your income just makes people feel ashamed now.

Me: Well, thank you, Mr. Griedesgud, for the interview. I suppose you’ll be going back to work for the rest of the day?

Chip: Work? What work? This story hasn’t changed since 1890! I’m going to dinner with some lobbyists at the “Oval Room”. I love a restaurant with a punny name!