Archive for the tag “Army Corps of Engineers”

I write because I believe fiction can be a vehicle for social change. I believe when the reader becomes emotionally engaged with a character, they too are moved to action. I met Corina Vacco when she joined the Berkeley Writer’s Group, and laughed at what I first thought, was a cool but whimsical YA novel with outrageous characters and wickedly sharp dialogue. 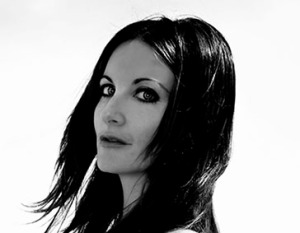 But Vacco uses her humor and excellent writing to fight for something she passionately believes in: our children deserve to grow up in a clean world as a foundation to each realizing his/her own potential. I can think of nothing more inspiring than empowering the next generation to action – and to do it reading and laughing is a powerful combination.

MY CHEMICAL MOUNTAIN, an award winning YA novel will be released by Random House, on June 11 and has been called THE OUTSIDERS of our generation. Vacco calls it “my love letter to a cleaner world, and my hope is that it will raise awareness of the growing problem of toxic towns and the lingering effects decades-old pollution can have on our present-day environment.”

Read her inspiring story below and, if you live in the Bay Area, join me at her book launch at Books Inc., Opera Plaza, 601 Van Ness, San Francisco at 7:00 PM on June 11 (appropriately situated opposite City Hall!). 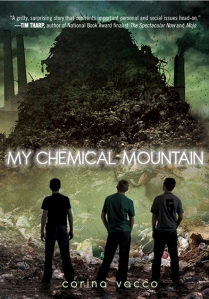 Culture shock ensued when the Coast Guard moved our family from the sun-kissed beaches of Miami to the cold, polluted city of Buffalo. It’s not easy to switch gears from palm trees to smokestacks, from saltwater air to the nostril-burning smell of a local asphalt plant, and this is especially true when you’re an environmental activist.

I had a cursory knowledge of Western New York’s pollution history. I knew of the Love Canal disaster—an elementary school and hundreds of homes were built atop 21,000 tons of toxic waste that later oozed into basements and triggered serious illness, along with forced evacuations. I also knew Rust Belt steel workers had unknowingly rolled uranium for the Manhattan Project during WWII, and that the corresponding uranium waste had ended up in landfills throughout the Buffalo-Niagara region. I was scared to live in such a place. Alright, perhaps a better word is terrified.

No sooner had I unpacked than I joined the fight against a contaminated landfill adjacent to a school and playground. Residents whose backyards blended into the landfill’s slopes had received official letters telling them not to eat vegetables out of their gardens. Unfortunately, the town meetings and public comment periods were nothing but thinly-veiled smack-downs of the residents who dared voice concerns. Panels of industry “scientists” and a smug, highly-decorated Army Corps of Engineers representative in full uniform stood at the front of the auditorium and admitted that yes, hundreds of contaminants were leaching into the local groundwater, but don’t you know each dangerous ingredient fell within acceptable limits? Of course, no one had even begun to test the effects of the entire cocktail of contaminants on each genetically-unique individual in the room, but it didn’t matter. The panel of “scientists” was absolutely certain there was no hazard, and a decision was made to leave the landfill alone. The residents, who obviously could not sell their homes, were told to go back to their lives and “just relax”.

I lived in Buffalo’s art district, far away from this plagued town and its infamous landfill. I should’ve been able to rest easy. But as it turns out, activists can never really rest easy. Not in this world. I was devastated when I heard the landfill would not be remediated.

One of my good friends lived a literal stone’s throw from the landfill and invited me on a toxic tour of her neighborhood. We visited defunct factories, a radioactive creek, and the boarded-up homes of Love Canal. She then introduced me to her husband, and they told stories about growing up amid such intense pollution. They recalled splashing in puddles the color of anti-freeze, riding their bikes down the landfill’s slopes, and breaking into contaminated factories. I was moved by these accounts, how a world so foreign to me, so repulsive, could be viewed with…nostalgia. They weren’t ashamed of their neighborhood. They didn’t want to flee. They wanted the pollution cleaned up so they could stay. Imagine that.

I wrote the first outline of MY CHEMICAL MOUNTAIN in my car, parked at the foot of an ominous, snow-covered landfill. There, with my window cracked so I could breathe the industrial air, I had long conversations with an angry boy who’d suddenly taken up residence inside my head. I asked him all sorts of questions: What is it like to live near one of the most poisonous landfills in the world? Why do you and your friends break into the abandoned factories when you know it’s dangerous? Are you furious about what happened to your father? And my protagonist said, “I have a story to tell you. It’s about revenge.”

MY CHEMICAL MOUNTAIN (Random House, June 2013) went on to win the Delacorte Prize for a First YA Novel, and has been called THE OUTSIDERS of our generation. It is my love letter to a cleaner world, and my hope is that it will raise awareness of the growing problem of toxic towns and the lingering effects decades-old pollution can have on our present-day environment. Please visit me at www.corinavacco.com.

If you enter the search words: Hurricane Katrina + a natural disaster, you will assume from the first few sites that New Orleans suffered from a terrible natural catastrophe in the last days of August and beginning of September 2005. A mighty hurricane, an act of God, man-made defenses could not stand up to the forces of nature… It is perhaps understandable that people thought that then. 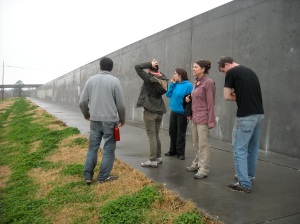 Here’s a word of advice. Don’t say that near anyone from New Orleans. In fact, after hearing their stories, after seeing the levees and the surrounding area, I don’t believe it either.

The levees were designed to withstand a hurricane the strength of Katrina, but they were not built the way they were designed. The bottom line is that the negligence in the construction of the walls was the reason why the city was devastated.

It’s like referring to the oil spill as a natural disaster. Wait, they did. The one article that stands out in the first ten on my google search is John McQuaid, who actually focuses in this post on whether we allow those culpable to subtly hide their shortcomings by blaming nature or God.

Or take the oft-litigated (in the courts and the media) case of Hurricane Katrina and the New Orleans levee system. I’ll repeat this here, for clarity: most of the devastating flooding of New Orleans occurred because faultyflood walls collapsed because of errors in their designs approved by the Army Corps of Engineers – i.e., the U.S. government. Natural disaster? Not really, though obviously nature had a hand in it. John Goodman’s character Creighton Bernette articulates this eloquently in the first episode of Treme.”

If we are failing to make the distinction between natural and man-made disasters because we are becoming numb to the series of catastrophes that seem to hit us, then this will become an increasing problem. If those who are taking the unnecessary risks, cutting the safety protocol corners to save money, are able to yield the nature/God car without impunity, that is darn right dangerous.

And unforgivable. Strong words? Ask the residents of the Gulf Coast. They’ve been hit twice in five years and, as people with a strong connection with the land, and many being God-fearing folk, they are not fooled by such doublespeak. They are just astounded that the rest of us are.