Archive for the tag “$4 per gallon”

I’m about to puke from all the whining about gasoline prices and oil company “price gouging“.

Well I’m here to tell all you whiners to shut up. You have voted, again and again, for “free enterprise”… for “market self regulation.” That one always makes me laugh through my tears. Self regulation… good God. “Listen, all you bank robbers out there, could you just agree not to rob any banks or that, if you do rob one, you won’t take too much money and won’t hurt anyone? Thanks. We really appreciate your being reasonable about this.”

So, here it is. This is the result of your (voters and people who COULD vote but don’t) choices – or lack of will to make a choice at all. You want the government “off our backs?” You want “smaller government?” You want so-called “freedom?” You got it! Congratulations. Here’s your prize: $4.00 per gallon OR MORE. 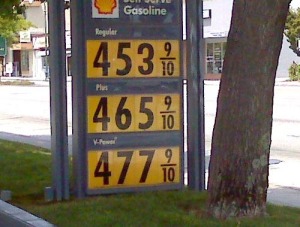 Meanwhile, the oil companies are raking in Billions with a capital B, and receiving billions more in subsidies from our tax dollars. That’s freedom. God bless America.

Oh, and nice head-fake, too. For a while, I was almost convinced that the American people had sprouted brains where their giant egos once sat. After the last big gas-price hike, people started buying much more efficient cars and parking or selling their giant Tonka toys. But then, when prices started to settle a little and people got used to them, the SUVs started to re-appear.

Every time I see one of these I want to say to the driver, “Hey! Thanks! Thanks for using up twice as much gas as you need to and driving up the price for everybody. I hope you have room in there for your massive ego.” It’s interesting that driving one of these giant cinder-blocks is supposed to be a sign of success and supposed to make people look up to you. If someone in our house takes really long showers, leaving little hot water for anyone else, we call that person a self-centered prick.

What’s most hilarious and depressing about this price situation is that now people are looking to the government, blaming Bush and now Obama, and asking why something isn’t done. Let me make one thing perfectly clear: What’s happening is NOT price gouging. The price is set by “free market” forces – the forces YOU have said (through your votes) that you trust to take care of everything. So now you want the government to go 180 degrees in the opposite direction?

Go drown yourselves in your tears… they’re cheaper than a gallon of gas.