Before the vacation, I suggested in a post, Changing The World, focusing on 10 actions that will make significant and sustainable change in our world.  Here is my first attempt.

I was walking with a friend down a main street in 2005 and asked him whether we would ever have true peace and what it would take. We passed under the price sign for a gas station, which was showing that gas prices had just gone above $2/ gallon and everyone was shocked. 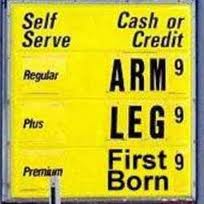 My friend shocked me when he replied that America would only be safe when we begin paying $10/gallon at the pumps. Now you should know three things:

I fill a gas tank six times a month: so with prices above four dollars I am not a happy driver. The number on my monthly budget spreadsheet has ballooned. So why am I advocating for $10/gallon?

First, the only reason I am not focusing on public transportation is that for many it is not relevant. We need to get around during our workday. We need to avoid looking disheveled and sweaty – I love the bike-share initiatives popping up all over the place – but they are simply not practical for many. Neither do I have the time to coordinate a car share schedule, much as I admire the idea. So I am stuck with needing a car near me.

I understand when we use certain technologies because there is no alternative. But there is an alternative now. The growth of hybrid cars, the electric car and other alternatives are all becoming common place. One of the most positive outcomes of the reinvention of the American car industry is the move towards gas-efficient cars. The Japanese, we all acknowledge, are years ahead of us.

But what if we truly laid a foundation for electric car by converting gas stations into recharging docks and, instead of one lane for hybrid cars during rush hour, it was the opposite? What if we taxed heavily the import and domestic production of non-electric cars?

And what if we raised gas to $10/gallon?

My motivation is two-fold. I believe much of our foreign policy is designed to protect our domestic energy needs. Wars are fought and countries supported with foreign aid because many are in oil-rich regions. We ignore terrible human rights abuse in these and other oil-rich countries. The connection between global terror and oil are clear and our dependency makes us vulnerable.

The second reason is simply that the earth cannot sustain the effects of our oil dependency. In a sense, it is already taking steps to prevent us destroying it as supply dries up and the environmental impact, both of global warming and regional disasters, become greater.

What makes this so frustrating is that the alternative technologies are out there and I am left with the feeling that they are being held back. Why? Because a lot of people still stand to make a lot of money.

I do not care to prioritize the millionaires of today over the abilities of my children and grandchildren to live in a sustainable and healthy environment.

Government can turn this around with three easy steps:

Alon Shalev writes social justice-themed novels and YA epic fantasy. He swears there is a connection. His latest books include: Unwanted Heroes and the 2013 Eric Hoffer Book Award for YA – At The Walls Of Galbrieth. Alon tweets at @alonshalevsf and @elfwriter. For more about the author, check out his website.