Can I Order some Democracy, Please? – Tom Rossi

Once in a while, we hear, in the news, about a strange, mysterious concept  known as “gerrymandering.” This is the practice whereby politicians make changes to the geographical shapes of political districts in order to give themselves and/or their political party more power. It’s done on an opportunistic basis by whichever party has power in a certain state at the moment and has no shame whatsoever.

However, in recent years the Republican Party has definitely taken the lead. The Dems are certainly not innocent, but they’ve taken a back seat to the recent flood of Republican gerrymandering.

How might it be possible to make more districts elect Republicans even if a majority of voters are Democrats? Here’s how:

First, identify geographic areas where Dems and Reps are concentrated. In other words, find areas that are not divided somewhat evenly, but where voting for one party is clearly dominant. Usually, this is as simple as separating the rich areas from the middle-class and poor neighborhoods. Then, draw new district borders, no matter how convoluted, around the desired areas, and voila’, you have cemented your power for the foreseeable future. 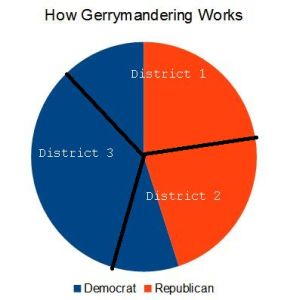 The Great State of Simplificatia

In the deliberately oversimplified diagram above (which is both a schematic and a fake map), you can see how gerrymandering works. The larger blue area (or population) votes Democrat, and the red area votes Republican. But if the Republicans set the districts, they can form one district that contains most of the Democrats, while the other two districts have a Republican majority. This means that, from this imaginary state with three congressional districts and a Democratic majority, one of the representatives that will be sent to Congress will be a Democrat, while two will be Republicans.

Due to various factors, people more often elect Republicans at the local level. This has to do with people’s (incorrect) perceptions about job creation, for one thing, but also the fact that many Democrats tend only to come out and vote in the “big” elections, for President of the United States, for example.

As a result, Republicans often end up in key positions of power from which they can control periodic redistricting. Of course, this phenomenon can and has taken place the other way ’round, but this is the dominant trend lately.

And it can be incredibly ugly on a real map: 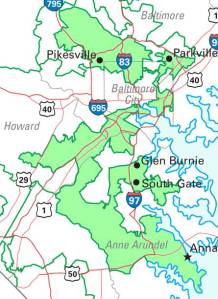 A single district in Maryland

What’s really politically beautiful (in reality, ugly) about this is that it provides the opportunity to whine about Democrats’ “making their seats safe,” even while, as I demonstrated in the diagram above, what’s really happening is the snatching of a seat by the Republicans.

For a much more detailed analysis of this problem, please read Sam Wang’s brilliant pieces: “Gerrymanders, Part 1: Busting the both-sides-do-it myth“, and “Part 2: How many voters were disenfranchised?” One conclusion that Wang reaches (with some good math and statistics) is that ten times as many Democrats have been disenfranchised as Republicans.

If it weren’t for this, Democrats would very likely hold the majority in the U.S. House of Representatives. That would mean that talk of austerity measures would die, as would talk of privatizing Social Security.

It would also mean that something might be done to prepare for climate change (that is already upon us) and maybe some steps would even be taken to minimize the amount and pace of climate change.

And get this… If Democrats really controlled the government, there would be less spending.

As Sam Wang suggests, gerrymandering disenfranchises voters. That means a hole in our democracy, and that’s unacceptable, whichever party benefits. With so much talk of “bringing democracy” to Iraq, Egypt, Afghanistan, and other countries, many are now saying, “Let’s bring democracy to the United States first.