Breaking: God to be Put on Trial in Iowa for Zygoticide – Tom Rossi

This just in from sAP wire (satirical Associated Press):

It was just over a year ago that the State of Iowa passed a law defining the abortion of a fertilized human egg (known to eggheads as a “zygote,” an egg that has been fertilized by a sperm) to be the equivalent of the murder of a child, teenager, or adult. Since then, Iowa law enforcement authorities have been made aware by those same egghead biologists and so-called “doctors” that most “abortions” of zygotes, and even morulae, blastulae, gastrulae, and embryos occur naturally, sometimes called a “spontaneous abortion,” a “miscarriage,” or, as Iowans say, as an “act of God.”

As a result, God has been arrested and, according to Iowa Attorney General Dick Rednecropper, will be put on trial for the crimes of “zygoticide, morulacide, blastulacide, gastrulacide, and embryocide.”

Rednecropper, interviewed in the courthouse, said: “Essentially, my hands were tied when we defined zygoticide as murder. It would be easy for a person, whether it be a man or a woman, who got an abortion to say, ‘I was guided by God,’ or ‘If it happened, it must have been God’s will.’ We circumvented that problem by simply saying that zygoticide is murder, no matter what the supposed justification.” 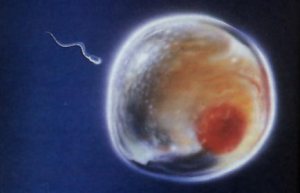 “Would you accept, as an excuse for murdering your wife, that the killer says, ‘She was ugly, and I just couldn’t look at her any longer?’ I don’t think so. We don’t accept God’s excuses, either. I mean, a tree would like to blame the wind when a branch falls onto your car or house, but it’s ultimately the tree’s responsibility to hang onto its limbs, isn’t it?”

Reporter Brent McStallwart asked, “So, is your office currently planning to prosecute trees?”

Rednecropper answered, “Don’t be ridiculous man. I’m just using that as an analogy. We don’t have the resources to spend on incidents like that.”

When asked how many counts of murder God would be charged with, Rednecropper replied, “Well, it’s hard to say right now. These here bile-ogists tell me it could be in the millions… maybe lottsa millions. It seems that, if a woman misses her per… I mean that time of the month where I sleep out in the shed, but then she doesn’t have a baby, there just mighta been a spotaneonous abortion. The egg mighta been fertilized, but didn’t stick where he’s supposed to. Either way, it’s an abortion, and that’s illegal.”

In describing the arrest, police officer Rip Burgundy said, “We had to spend almost half an hour searching for his hands in his long, flowing, white beard in order to put the handcuffs on him. He didn’t really resist, he just kept rolling his eyes. He has huge eyes. Everybody at the scene could easily see his reaction. It was kind of, you know, disrespectful to us as officers of the law.” 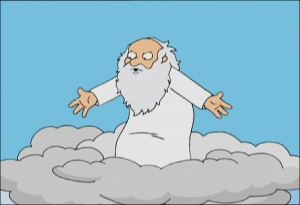 Officer Burgundy added, “Usually, in these situations, we use our Tasers, but we knew that there were some liberal noise makers in the crowd that would just love to accuse us of police brutality. So, since he wasn’t black anyway, we decided not to do it.”

God’s arraignment is set for this Friday.

Meanwhile, upon further study of the phenomenon of spontaneous abortion, Iowa law enforcement officials discovered that virtually every woman may have had, at some point in her life, a spontaneously aborted zygote, morula, etc. When asked what this would mean for Iowans, Attorney General Rednecropper said, “We start rounding up the women next week.”