Unwanted Heroes was much longer before my editor got his hands on it. A number of chapters were cut because they do not directly move the plot along. They seem to have something in common – my desire to show the many facets of San Francisco. I would like to share then with you over the next few weeks.

There is nothing here that spoils anything in the book – which probably vindicates the editor’s decision. 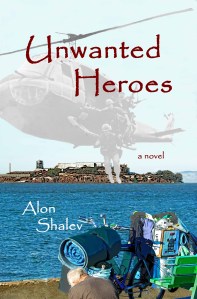 San Francisco boasts a Chinatown unrivaled outside of Asia. It feels like a different world with its own products, language, culture and traditional medicine. Unlike other Chinatowns in the US, it also has a feel of authenticity, as though this neighborhood is for the residents and the tourists are, at best, tolerated.

Chinese Medicine is well respected in California and a Chinese medical practitioner is held in high esteem, especially if their clinic is in Chinatown. If you live in San Francisco and have a health challenge, a visit to the Chinese doctor is a rite of passage.

I have suffered from allergies all my life, which developed into occasional asthma a few years ago. But my introduction to Oriental medicine happened because…because I had no choice…she was pretty and I wanted to hit on her.

“You must see my herbalist!” I am not sure if this is an order. “I used to be just like you, now look at me.” She giggles as she twirls.

I am at a party in the Mission District, not long after alighting from the metaphoric boat. A new friend has taken me under his wing and this party should have been my much-anticipated coming out event, my chance to make an impression on the Bay Area social scene. I have meticulously dressed to impress and carefully sharpened my English accent in preparation. My face is smooth and keenly saturated with aftershave. I am ready.

And then I have an allergy attack: just as I step into the house where the party is taking place. My tongue begins to assault the roof of my mouth. My nose begins twitching, transitioning swiftly into exploding mode. My already-fragile ego implodes as people rapidly evacuate this part of the room, putting a safe distance between themselves and me. I am a pariah. It is truly an unforgettable coming out!

Someone takes my arm and guides me through the crowd; it is not challenging. Moses couldn’t have parted the Red Sea with the ease of an erupting allergist in a crowded room. I assume my guide is a bouncer and I brace myself to be thrown onto the street, if not straight to Alcatraz. This is a country that insists you put a bottle of beer in a brown paper bag in order to quench your thirst outdoors, but allows you to carry a semi-automatic rifle with impunity; I have surely broken some law. Still there are other cities in the US, I think miserably. What was the name of the Northern Exposure town in the Artic Circle?

Through tearful eyes, allergy and self-esteem in equal parts; I see that the arm supporting me is female, slim and tanned. She somehow manages to grab a box of tissues as she leads me down some stairs and into a small garden. Other partygoers abandon their need for fresh air and I realize this would be a good ploy if ever a more romantic situation materialized.

I am seated on a metal bench and when my nose is finally exhausted, I look up, trying to appraise my Florence Nightingale. She is blonde, thin and wears an expression that doesn’t try too hard to hide the smirk. I am vaguely aware that she has been saying something.

“You must see my herbalist!” She repeats enthusiastically. “I used to be just like you, now look at me.” She holds out her arms in expectation that I appreciate her humor. Well she deserves it.

“Will your herbalist transform me into a beautiful blonde angel?”

She blushes. I have gambled that this brash approach would either compensate for my memorable entry or to scare her off and leave me alone in my misery. I’m not sure which I prefer. She remains standing in front of me and folds her arms across her chest, coincidently emphasizing her cleavage while slightly arcing her hips to one side. It is pleasantly effective. My mind stops dwelling on my social debacle, though this is not easily achieved.

“Julie. Joe says you’re the new boy, the freshman. Welcome to America. Do you always make such an entrance?”

“Have you been to Chinatown?” Julie asks.

“No. I’ve only been here two weeks. Looking for a flat, err apartment,” I correct myself, “and a job have been the priority.”

“Next weekend I am moving into a house in the Sunset. It’s student land, but the rent is in range.”

“And I’m hoping the ground will swallow me up any moment.”

She smiles again. “I’ll forgive you this time. But you’ll come with me to Chinatown.” 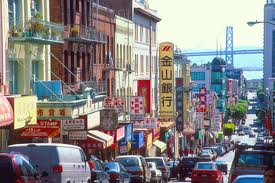 I shouldn’t complain. Two weeks into discovering America and my hand is being held by an attractive business major guiding me through the uniqueness of the Far East, out here in the Wild West. Christopher Columbus surely never had it so good. No Starbucks, no public transport system where they actually remind you that you can use the ticket a second time, no cable TV with four hundred channels and nothing to watch. Sure Columbus discovered America before me, but he had to deal with wild ravenous predators, indigenous populations who showed scant appreciation for arrogant colonialism, greedy gold miners and zealous missionaries. My biggest dilemma is whether to watch Saturday afternoon British soccer at seven o’clock on a Saturday morning. Thankfully around this time I discovered Digital Video Recorder: God bless America!

I think the most impressive aspect of Chinatown is that it is full of Chinese people. I mean it. Millions of tourists pour through her marble gates and take excited pictures by her ever-guarding dragons before buying Chinatown, San Francisco T-shirts, three for ten dollars, no returns. But one senses that the real business happens between the Chinese and there are so many of them. Certainly there are no Westerners lining up to buy live fish, fresh turtles and scantly feathered birds of every kind. The negotiation over the price of vegetables displays the gritty determination of a people who have survived five thousand years. The Yellow Emperor and Mao Tse-Tung may have come and gone, great dynasties risen and fallen, but the bok choy must remain fresh and firm if it is to be purchased. One look at the grim-faced, scarf-covered, vegetable buyer and you know that this bok choy is seriously stir-fried.

But my lovely companion leaves me no time to play philosopher-tourist. Julie guides me effortlessly skirting the precariously stacked and pushed vegetable and milk carts being continuously unloaded, elbowing through the throng of bargain hunters, whether their prey is embroidered purses or stuffed pig heads. Between breaths she points out different things, arming me for survival in this surreal world.

But surrealism is only just beginning. There will be no escape.

Having turned on Clay Street, I had tried to duck into a bonsai shop. I have a long held fascination with bonsai and consider myself a bit of an expert having watched The Karate Kid at least a dozen times. I fancied the salesman might have been my Mr. Miyagi, my mystical Taoist teacher, and I could have learnt the secret ways of the Orient and the pruning of bonsai trees from him. But I am dragged on, deeper into the bowels of Chinatown. 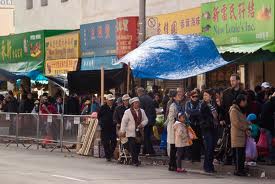