My wife’s family is big into vintage American cars; they collect and restore the classics. My brother in-law builds hotrods, ratrods and some of his work has shown up in automotive magazines. I’m a car nut too so I fit right in. 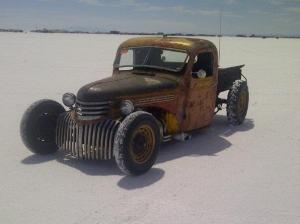 Prior to meeting my wife and her family, I would frequently hit some of California’s famous road course tracks with my 200mph Viper GTS ACR to release the pressures of corporate life. Later, thanks to my wife, I was introduced to dirt oval track racing and got hooked. I raced in the local series for about five years until a turn three incident at Antioch Speedway put me headfirst into the wall at speed, I survived but the car didn’t. The mangled mess still sits in the trailer exactly where it was dumped two years ago. She’s a sad sight; the only working piece was the battery which now starts my brother in-laws racer.

Finances don’t allow the rebuilding of my racecar and, realistically, I’m too old to compete with the young bucks that don’t give a hoot about destroying theirs or another’s equipment. But I still get the automotive urge to get my hands dirty.

Like my in-laws, I want to rebuild a classic. When talking about the make and model of vintage car I desire, everyone scratches their head and laughs as if I were crazy. But, what they don’t understand, there’s a reason for my apparent lack of coolness. I have a dream. A dream project that incorporates many of the things that I enjoy: cars, engineering and social activism.

At this point, you may be asking, “what the hell does social activism have to do with rebuilding an old jalopy?” The project will show how big business conspires to keep the demand for oil high by not engineering cars that can easily get 50 plus mph. It will also protest California’s draconian smog laws by avoiding the issue altogether due to the old age of the car. I’m all for clear air but anti-smog regulations should be based on actual engine emissions and not on tactics truly meant to raise revenue for the state (don’t mask a revenue generating tax under the veil of smog reducing propaganda).

The desired car for my project that brings laughter to friends and family is…wait for it…a Corvair, the car that put Ralph Nader on the radar. The Chevy Corvair only had a ten year production run due to bad press, some deserved but most of it was hyped misinformation. The car was a technological marvel that was years ahead of its time. A list of design elements for a 1960 Corvair family car and the world famous Porsche 911 sports car, first introduced in 1965, are almost identical.

It’s my belief that with some engineering, this 50 year old car will get more than 40 mpg proving that technology has existed for many years to make automobiles more efficient. The only roadblock to improved mpg has been oil and automotive lobbyist. Since the Corvair was manufactured before 1975, it is exempt from CA smog requirements allowing me to give a big FU to the crazy smog regulation that have nothing to do with exhaust emissions.

This is my dream project, my dream protest. It combines cars, engineering and a little activism…fun stuff.

Special note: For those interested in knowing why the Corvair was selected for this project, leave a comment and I will explain the technical benefits of the car.