No More Nukes for North Korea… or for Anyone – Tom Rossi

The U.S. government and media, as well as the U.N. and many of its member nations, are up in arms over North Korea’s latest nuclear weapons test.

It seems that, despite his expensive Swiss education, Kim Jong Un is following closely in his father’s (Kim Jong Il) footsteps. The U.N. has approved major economic and trade sanctions against North Korea, as a result.

And why wouldn’t he? Why wouldn’t Kim Jong Un want to give himself and his nation nuclear capability? That’s the only way to guarantee the longevity of your dictatorship, these days. Well, either that or cooperate fully with America’s corporate-operated government, and that’s just not going to happen in this case. 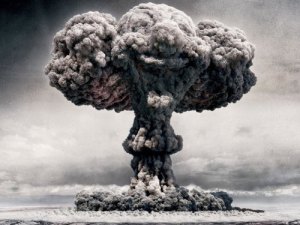 Let me make a dire, pessimistic prediction… There will be an explosion of a nuclear device, either here in America, or in Europe, in the next couple of decades. There is simply too much nuclear material out there, and the distribution of technology is getting harder and harder to control. And, lest we forget, there are many different groups out there, some with official flags (like Iran) and some without, that are, at this very moment, working as hard as they can to gain nuclear weapons capability.

With the current state of affairs, this nuclear progress can only be slowed by our best espionage and military efforts. We try to keep our “enemies” out of the nuclear country club, while allowing our “friends.” But one day, there will either be a “leak” of materials and technology that will allow the wrong group to get what they want, or one of our “friends” will do something stupid.

There only one real solution to the threat of nuclear weapons eventually being used by either governments or terrorists – a complete, worldwide ban on any and all nuclear activity (mining, power, or weapons), except the tiny amount (with different isotopes) that’s needed for medical purposes and biological research.

This would be the only plan that could actually be enforced, and even then, only with agreement from the world’s major powers, including China and Russia (I don’t remember saying it would be easy). It would be relatively simple, with remote sensing from satellites and spy planes, to find any and all mining of nuclear material.

This would mean that we would have to finally reject the dreamy tales of efficient, low-pollution energy (that weren’t true anyway) that have been the gifts of the nuclear industry’s PR machines. We would be far safer, in so many ways.

Nukes just might be one Pandora’s box that we can close again – at least most of the way.