We Catholics Have a New Popo – Roger Ingalls

I feel comfortable using Popo in place of Pope; it’s a term of endearment. “Forgive me Father for I have sinned, it’s been a bazillion years since my last confession.” As a youth, I did my time in the church, going to Mass, Catechism and was even an altar boy for a day so I’m entitled to a little fun. Yes, I carried The Body of Christ, in the form of a host, down the aisle to the Priest. The altar boys nicknamed the hosts Tortilla Seeds because they looked like little baby tortillas…ah, the imaginative mind of a kid.

Strange day, I found my ear glued to the radio for over an hour waiting for the Latin announcement naming the new Pope. The good Catholic boy doesn’t practice anymore so why was I so interested? For historic reasons, I guess.

In a somewhat surprising move, the Cardinals selected Jorge Bergoglio as the new Pope; a humble, soft spoken Priest known simply as Father Jorge in his community. He’s the first Pope born in The New World (Buenos Aires, Argentina), it only took 500 years! 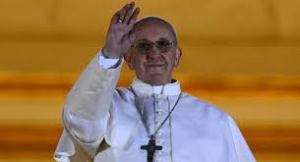 Considering the stagnation of the three main monotheistic religions, the selection of Bergoglio is a progressive move. I was hoping for a more liberal choice that would potentially move to align the Church with the realities of today’s society but I do praise the selection, it’s a step forward. Father Jorge, now known as Pope Francis, is 76 and may not be around too long so perhaps this was a calculated transitional choice by the Church as it moves to modernize.

By all accounts, Pope Francis is a man of the people so I look forward to seeing what he does as the most powerful religious leader in the world, especially since he’s from outside the Old World power zone.