Israel’s Election – A Path To Peace?

Israel went to the elections last month. Democracy is a beautiful thing to behold, especially in the Middle East. At the time of writing the parties are swiftly forgetting their pre-election promises and shamelessly bartering to be in the ruling coalition or in the vanguard of the opposition. It is a depressing process fit more as a soap opera than the establishment of a government.

Friends here in the US  ask me what the outcome of the elections might have on the peace process? It is difficult to answer because this election was never about foreign policy. There is a general consensus in Israel that there is no one to negotiate with, that every initiative is snubbed before anyone sits around the table. The instability in Egypt and the dreadful civil war in Syria (both border-sharing neighbors) do not add any sense of urgency to move the peace process forward. There is a sentiment that if a peace treaty is negotiated with one body, will they still be responsible for it six months later? After the recent campaign against Hamas in Gaza, the question isn’t whether they will return to launching missiles into Israel, but when. Partners for peace?

Israel’s economy has suffered in a similar way to the US. They saw an Occupy Movement emerge before it happened here in the US and the economy was the focus. 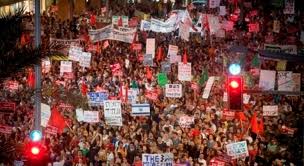 I understand the need to shore up the economy. Israel suffers from a huge gap between richest and poorest. At some point when I was living there, it was greater than anywhere in Europe.

Benjamin Netanyahu has two options: a right wing government that includes many extremist elements and there is no peace process, or a coalition with the center and moderate left. While Netanyahu is perceived to have lost considerable ground to the center and left as a rejection of his tight fiscal policy, there is one important glimmer of light in all this.

A right wing hawk with the help of the left and center signed peace with Egypt. If Israel can find a stable Palestinian leadership to negotiate with, perhaps there is a window of opportunity for peace.