During a recent grocery-chain strike, in which the workers were not trying to gain anything, but stop the company from taking away a large part of their health benefits, we all got to hear the broken-record, trump card ubiquitous employer-speak in these situations – “We have to stay competitive.”

“Oh, OK. Competitive. Yeah.” That’s the unspoken response. Everybody accepts the argument. But wait a minute… What argument? What does “competitive” mean, anyway? This is such a magic mantra of capitalism, that we all just accept this vague smokescreen without question.

Well, here’s the cheat-sheet on this code: “competitive,” in this usage, refers to nothing except a company’s value on the stock exchange. It has nothing, whatsoever, to do with attracting customers, nothing to do with whether or not new stores can be opened up, and nothing to do with the prices of food and other items in the store. 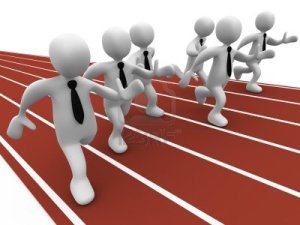 This is the direct result of our wonderful corporatocracy. For a company’s stock to compete with other stocks, for it to keep rising in price and paying dividends, profits always have to be rising. And half of the profit equation is costs, including labor. That’s why corporations are always trying to cut pay and benefits, at least when they can get away with it.

This particular strike, however, took place at stores mostly located in San Mateo County, just south of San Francisco, CA. Sorry, bean-counters. In the Bay Area, people care about each other, and they care about fairness.

When the workers went on strike, the customers did something miraculous… they honored the picket line and refused to shop at the stores. This caused revenues to drop like a stone, and soon the company realized it was losing much more money than it would cost to keep their employee’s health benefits intact.

There’s a not-so-subtle lesson here: If we stick together, we can at least hold our ground against the corporate onslaught. Instead of envying our neighbors pay or benefits, we should demand a reasonable living from our employers too. Think about it, instead of jealously berating public employees for having things like a retirement benefit, shouldn’t we all be asking why we don’t all have that?

Don’t buy the vague, bogus “competitiveness” argument. It’s a cliché meant to cow the populace and trick people out of actually thinking.