Heroes Slipping Thru The Net

Mentioning my latest book, Unwanted Heroes, at Xmas holiday parties last month seemed to strike a resistant chord with a number of people, none of whom were war veterans, but often had a close family member or friend with a difficult story.

The issue that a homeless person who does not take advantage of the benefits offered also touched a nerve. The now-famous story of the NYPD officer who bought a pair of boots for a seemingly homeless guy sitting outside a shoe store barefoot in winter has been overshadowed by the fact that this man actually has a room provided by the VA and social services. He also has shoes but chooses not to wear them or live in his apartment.

There are many people who vigorously defend the VA and, correctly, cite the vast improvements seen in the last decade or so. But I remain unconvinced that we are doing enough.

President Obama said in a Veterans Day speech: “No veteran should have to wait months or years for the benefits that you’ve earned … so we will continue to attack the claims backlog. We won’t let up. We will not let up.”

The New York Times ran an article in late November, “that the Department of Veterans Affairs, in the long slog through its own paperwork, is in some ways marching backward.”

In fact, during the first half of the year, two-thirds of claims for disability and pension were still pending more than four months after being filed. This is in spite of the VA having strict timelines for claims. This lag gets even worse when a rejected claim is appealed, with the average duration to resolution being two and a half years.

There are two important points to take into consideration:

1) Many of those who need help are challenged to deal with bureaucracy – any bureaucracy. Most everyday citizen has challenges with personal documentation filing, understanding procedure or dealing with a labyrinth of organizational structure. How much more difficult can this be for someone with trauma and mental instability?

It seemed to me that many of the people who complimented the VA system were people who were well-organized (or had a partner who was) and able to work with the system.

2) The Department of Veteran Affairs is reeling from an avalanche of people stepping forward in need of help. The New York Times article cited that the number of claims has doubled in the last decade, reaching 1.3 million in 2011. 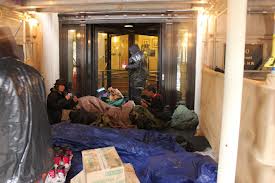 In addition, almost half of the veterans seeking help are coming with more than a dozen medical issues, far higher than anything seen after World War II and Vietnam. Again from the New York Times: “Many Afghanistan and Iraq veterans are returning with severe injuries requiring elaborate and complicated care. The population of Vietnam-era veterans is older and sicker than ever. And the list of ailments for which the department is giving compensation — like heart disease, leukemia and Parkinson’s, from exposure to Agent Orange — is growing.”

This suggests that we should not be criticizing the VA, rather providing the infrastructure necessary to deal with this explosive growth in need. Steps are being taken to move records to an intranet, but the department simply needs more hands and a simpler process.

The New York Times article suggests that the VA be more realistic in predicting how long a process will take to allow these men and women to plan accordingly.

I side with President Obama on this issue. When the United States called for it’s citizens to take up arms to defend the values intrinsic to our society, the people didn’t answer by giving a vague date when they might turn up.

Waiting two-and-a-half-years to receive what is rightfully yours after sacrificing so much for your country is simply unacceptable. There are too many Unwanted Heroes slipping through the net.

One thought on “Heroes Slipping Thru The Net”