In Riverside, California, a controversy is brewing… over a cross.

It’s a huge cross, 35 feet in height, standing atop the rocky, steep-sided hill known as “Mount Rubidoux.” The Washington, D.C.-based group, Americans United for Separation of Church and State has threatened to sue the city of Riverside, contending that the cross, which has existed in one form or another since 1907, amounts to a government endorsement of Christianity, and therefore violates the first amendment of the U.S. constitution.

The separation of church and state is essential to just governance. It’s crucial that a nation’s important policies be decided on their merits as to their effects on that nation’s citizens. But a well-known aphorism applies well here: Pick your battles.

This battle, against a cross that is much more a monument to the history of the region than it is a monument to Christianity, is more than just a waste of effort, it’s counterproductive to any real progress in furthering the separation of church and state.

This particular battle is pointless, misguided, and damaging to the image of the people who should be (and in many cases are) fighting for changes that actually mean something. In fact, so much so that I almost wonder if the whole thing isn’t another Karl Rove “brainchild,” cooked up to make “liberals” look like idiots. In fact, several conservative groups and media outlets have seized upon this misplaced effort to ridicule “liberals” in general and to call all good Christians to the defense of their religion.

The incident has prompted a HUGE outpouring of support for the Mt. Rubidoux cross and, predictably, hatred for “secularists.” What else could Americans United expect? It’s the easiest forecast since Superstorm Sandy.

Essentially, this is a frivolous issue, but one in which the “opposition,” those who want to “defend Christianity,” are passionate. In other words, this battle is a sure loser. 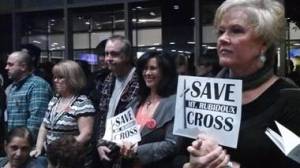 As this blogger and many others have said many, many times, our efforts should be put into issues that really matter. The separation of church and state is certainly one of these, but the display of a cross or a Nativity scene is not. The way to address these “problems” (if you insist) would be with a sense of humor and irony, as well as with patience and tolerance.

Let me leave you with a letter to the editor of the Press-Enterprise, Riverside’s blatantly conservative daily fish-wrapper. The letter is from Riverside resident Mark S. (last name withheld here) and is quite eloquent:

“There are many serious places where narrow-minded religion creeps into civil society. Prop. 8’s ban on same-sex marriage and the fact that almost half of Americans don’t accept evolution come to mind.

The Mount Rubidoux cross also reflects narrow-mindedness, but with a secular twist (“Council ponders Mount Rubidoux cross options,” Nov. 14). Americans United for Separation of Church and State is behaving exactly like a fundamentalist organization, substituting an idolatrous interpretation of the Constitution for an idolatrous interpretation of the Bible.

Why should Riverside have to spend time, effort and money to support this group’s self-righteous views? This battle just makes AUSCS look like a fringe group and weakens its argument on serious issues.

The cross was a gift; it cost us nothing; leave it alone. If you don’t like it, don’t climb Mount Rubidoux.”