Back to Gun Control … Inevitably

I waited to post this one out of respect for the victims though I wrote it over that terrible weekend. My thoughts go out to those who lost loved ones in the theatre shooting in Colorado. I cannot imagine what you are experiencing and I won’t pretend to. 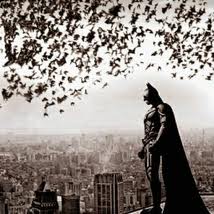 I also feel kind of foolish and guilty, and I am sure that I am not the only one. When do we take on the issue of gun control? After a tragedy. After innocent people doing something that we all do regularly and are horrifically struck down. But once the victims are buried and their survivors have vented, we move on.

Until the next time…

Last time I broached the topic of gun control, I was told by several people that it is fundamentally an American issue and that, try as I do to be as American, it is impossible for an ‘outsider’ to understand how deeply this cuts into Uncle Sam’s psyche.

America is the land of the free. We all agree on this, right? We all want a government that takes care of big issues such as law and order, and defense of the realm. We simply don’t agree where to draw the line and who foots the bill.

Having the right to bear arms is for many the symbol of freedom. For me, the issue is not so clear-cut. I have sympathy with the woman who shot a man who was breaking down her front door and clearly threatening to rape her and kill her baby. So did the 911-dispatcher when she realized no one was going to get to the woman’s aid in time. I imagine that anyone who heard the tapes of the phone call understand this scenario.

To have the ability to defend herself, this woman needed to be able to legally able to buy a gun and ammunition. If this is the mission of the NRA and its supporters, it sounds reasonable.

But this is a long way away from the ability to purchase, in full view of traceable data, stacks of guns, ammunition, and explosives. There is a line that must be drawn not just between who has the right to purchase a gun and who doesn’t, but what they are allowed to possess. It should only be enough to defend yourself and your family against an assailant. 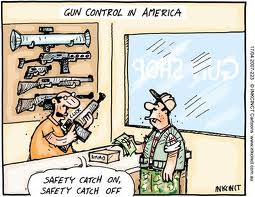 There is a colleague in my writers group who has written a post-apocalyptical novel based in the Bay Area. I am not familiar with the genre, but the story has stuck with me. This is in part because the story is taking place in my backyard, but it is also that my friend has researched his weapons and doesn’t spare us the graphics.

As he lists the various stockpiles that the good and bad guys amass, I realize that this is based upon the premise that there are enough people out there (in our backyards) who are amassing arsenals of weapons.

Would putting limits on how many weapons a person can have really impinge upon our freedom? Would America no longer be free if the bad guys packed less weaponry than our own police?

And what kind of freedom do we really have when we are too scared to go to the movies…and watch a superhero battle crime? 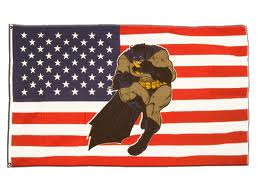 2 thoughts on “Back to Gun Control … Inevitably”