Genocide of the Middleclass – Roger Ingalls

James Carville has just released a new book (It’s the Middle Class, Stupid) and the President is now shaping his re-election rhetoric around helping the middleclass so I feel it is prudent to repost (with edits) one of my earlier articles about the subject.

It is mind-boggling that so many Americans have a god-like fascination with Ronald Reagan. This is the man who set in motion the financial destruction of the middleclass. Unbelievably, a significant portion of Middle America still loves the man. Why? Is it some sort of Battered Wife Syndrome  or is the conservative middleclass too embarrassed to admit that they were duped by the Republican Party?

But, here we are, repeating stupidity. Instead of trying to reverse Reaganomics, conservatives are still trying to enhance it; more tax cuts for the rich and for corporations, more union busting, deregulation and privatization of government programs.

To increase our understanding, let’s review history: today, many Americans believe that middleclass society magically appeared with the birth of our nation and grew over time. This is not true. With the market crash of 1929 and the subsequent Great Depression, the country fell into economic chaos and floundered under Republican President Herbert Hoover. Prior to that, there were a few rich people, a lot of poor folk and a handful of in-betweeners. Franklin D. Roosevelt became president in March of 1933, quickly launched new legislation and executive orders that would become known as the New Deal.

The New Deal increased taxes on the wealthiest Americans, increased corporate taxes, regulated banks and Wall Street, created government programs (social security, unemployment insurance and minimum wage), and created pro-union alliances. FDR’s policies pulled our Nation out of the depression and gave rise to Middle America. In less than a decade, the middleclass would grow to become the largest demographic in the country and the envy of the world—The Great American Middleclass.

From the late 30s through the late 70s America prospered, the Middleclass would live comfortably and we became the undisputed world power. In steps the B-movie cowboy with his traveling show of Reaganomites and the genocide begins. Middle America was forced to save less just to maintain living standards, eventually leading to the necessity of financing their way of life. Wealth transferred from the Middleclass to banks, corporations, the rich got richer and this trend continues today. Wealth disparity now sits at the largest level since the robber-baron days of the late 1800s through the 1920s. 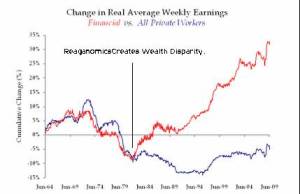 Americans need to act by educating ourselves on what policies actually work based on historic proof. We must not listen to money-influenced mainstream media. We must not let ourselves get polarized (against each other) through agenda promoted by today’s corporate-financed politicians—it’s their tactic to divide and conquer.

Genocide of the Middleclass, begun by Ronald Reagan, must stop. Hopefully the influential power of James Carville will help bring attention to proper change. And maybe, just maybe, the President’s renewed commitment to the middleclass is more than the normal lip-service.