The Ones Not Executed

June is a special month for my family. In a few weeks, my eldest son will complete a rite-of-passage as he stands before our community and fulfills three obligations as he becomes an adult in the eyes of Judaism. He will lead the community in prayers, read from the Torah (Old Testament), and teach a lesson from the passage he had read.

The Torah portion deals with the death penalty as a man found gathering wood on the Sabbath is stoned by the entire community and the Israelites are condemned to die in the Wilderness and never enter the land of milk and honey.

As my son read this and we talked about the scenarios and lessons that could be gleaned, we discussed the death penalty and ways of punishing people when they do wrong.

Last year, during my annual week of service on the Gulf Coast with students, we met two men who had each served over 20 years each in jail for crimes that neither had committed. One had been on death row. These two men were exonerated because of the use of DNA testing in post-conviction criminal cases. DNA testing has proved that more than 250 people had been innocent and had sat in prison for an average of 13 years – the age my son is as he reaches his bar mitzvah (his rite-of-passage). 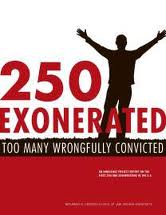 It is hard to imagine. My eyes filled with tears when one told us of the son or daughter that he had never held. He was now in the process of getting to know his now grown up child. How can a person be compensated for this? Any aspiration he once had for a good education and career have long disappeared.

The Innocence Project is an advocacy group who would like every state to have an exoneree compensation law that reflects the guidelines set out on a federal level (23 states do not at the time of writing). Current federal guidelines provide the wrongly incarcerated up to $50,000 per year of wrongful incarceration, and $100,000 per year served on death row. “The beauty of a compensation statute is that it provides a formula that treats everyone equally,” says Rebecca Brown, policy advocate for The Innocence Project.

I believe it is important to financially compensate exonerees and ensure that they can live out the rest of their lives with dignity and meaning. There is an important place for an advocacy group such The Innocence Project.

But I can’t loose the image of the man in New Orleans, who never got to hold his child and now must pick up the pieces with his adult child. I will soon stand by my son in front of our community, a son that I have stood by for thirteen years and will for many more. There are some things that you cannot put a price on.