The reasons that the Iraq war was probably the worst idea in 40 years or so just keep piling up.

There’s the trillion-plus dollar cost, there are the thousands of American lives lost. There are the hundreds of thousands of innocent Iraqi lives lost. There’s the environmental damage, both in Iraq and through the global effect of burning many millions of gallons of needless fuel. There is the damage done to our relationship with the Islamic part of the world. There’s the damage done to our image – both in the eyes of the world and in our own eyes, as we have descended into the realms once reserved for those we ourselves termed, “war criminals.”

When people criticize the Iraq war, they are often ridiculed in a number of ways, including being called, “pacifists.” I’m not really sure what would be wrong with being a pacifist, but I’m not really one of those.

I think that peace should be the goal – always and in possibly every situation. I think that every measure should be considered and many of them tried with due diligence before military action is undertaken.

Sometimes, military action is actually called for. As I’ve mentioned before, World War II was an example of this. But because of the Iraq fiasco, we now have little credibility, on the international stage as well as with our own populace, when it comes to the use of force.

So, what if it becomes necessary to go into action? What if the baloney about Iran’s nuclear intentions actually comes true someday? And I’m not a big fan of the United States’ role as planetary watchdog, but what if we were to decide that we just can’t put up with state-perpetrated mass murder as we are seeing in Syria?

We have dredged the bank, the collective will of our people, and the depths of the credibility of our government and there isn’t much left. The result is that when the use of our military might could actually be appropriate, it will be extremely difficult to initiate and/or sustain. We have become, simultaneously, the prodigal son and the boy who cried wolf.

It angers me to no end that we’ve spent over a trillion dollars on Iraq, and now teachers and even cops are being laid off, while libraries and schools are closing for want of money. It also angers me that we pretend to be the world’s big brother, sending our military on mercenary missions while we ignore the deaths of many thousands in places like Darfur. 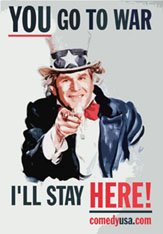 I’m not against the use of our military or even our government. I’m against hypocrisy, waste, and needless deaths.