I’ve uncovered the answer to one of the great mysteries of modern American capitalism: The reason that you become less credit worthy if you move your place of residence too often is not that it shows that you’re unstable or unreliable…

It’s because it shows that you’re insane. Why do we do this to ourselves? How do we convince ourselves that some, little concern like proximity to a job, needing extra space, inability to pay your mortgage, or not wanting to be irradiated by a huge bank of “smart” meters is worth the incredible pain in the ass of moving?!?

Each phase of moving is horrible. Sure, at first it seems exciting to look for a new place – it’s like window shopping. But it soon gets old, especially as you realize that you have limited resources and can’t afford the rent/mortgage on your “dream” home.

In fact that’s what haunts the entire process – money. My wife was frustrated with the whole process as we could not seem to find a place with the right combination of proximity to transportation, space, layout, a neighborhood where we would expect not to be shot or stabbed during daylight hours, etc. This was when I observed that it would all be so easy if we just had more money. 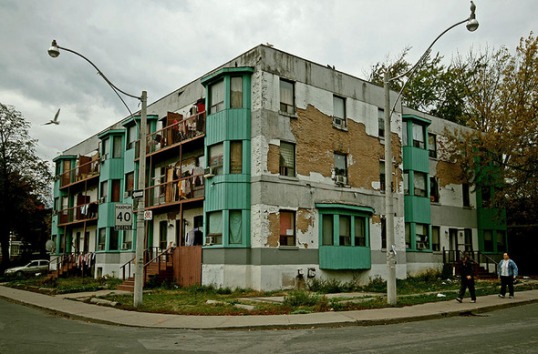 The same could be said of the moving process. If we just had more money, we could have hired a moving company to do all the work and my back would still work right.

I don’t really have an alternative system to suggest, but money has really taken over our lives. Our entire worth as human beings is defined by how well we make money. By this measure, the only measure that really seems to count, I am worth at least a million times less to humanity as Donald Trump.

Not only that, but people who bring us television advertisements are worth several times more than the average teacher.

The material world is now our only world. A neoclassical economist would argue that our capitalistic system is simply the nearest approximation to an efficient way to allocate resources. First of all, efficiency doesn’t mean the same thing to an economist as it does to the manager of a bicycle factory. But it’s gone much further than that.

Like I said, I don’t necessarily have an alternative to offer (I’m working on it – don’t hold your breath) but to me earnings have always seemed out of whack. The average pro athlete makes ten times the pay of the average janitor (custodial engineer or whatever is the current, politically correct term). This seems completely backwards to me. I’d play pro hockey for practically nothing, but you’d have to pay me a fortune to clean toilets all day.

And come to think of it, I’m entertained by watching sports, sure. But given the choice, I’d take the lack of pro sports over the lack of clean bathrooms and kitchens. To me, that means that janitors are more valuable than pro athletes. I think a lot of people would agree. If enough people agree, then janitors are worth more to society than are pro athletes.

And because, while I’m certainly annoying, I’m definitely less annoying than Donald Trump, maybe I’m worth more society than he is.