When President Obama took office in January of 2009, some people all of a sudden got very concerned with government spending – which they had ignored during the Bush administration. Republicans and InsaniTea party members want social services cut to the bone. But it seems that whatever cuts are proposed by Democrats, they are not nearly enough – just scratches in the surface of the money that needs to be saved.

So, here are my cut proposals to make life less painful to those always suffering Republicans. Call these: the ideas I would have if I suddenly lost my mind. Or call them, the endpoint of “austerity.”

Eliminate the police. Those who are worthy of protection can afford to hire their own, private security anyway.

Privatize fire protection. If I want to protect my house from fire, I’ll pay for it. If your house burns down, why should I care?

Eliminate most of the military. We really only need a few drones and a few nuclear missiles. Those should keep our enemies in check. The rest is a waste.

Eliminate public education (this one’s already on the chopping block in R version of dungeons and dragons). Are you kidding me? I’ll send my kids to private school and yours can train on the job to tend my landscaping.

Privatize everything to do with water. Sell all water rights to the highest bidder and let that corporation sell water to those who wish to buy it.

Eliminate sewer services. People who want to make sewage go away and/or be treated can pay for it. The rest can live in their own filth.

Stop building and maintaining dams. We can get plenty of electricity from good, old-fashioned coal. We have lots of it. And as for flood prevention and that sort of thing… move to higher ground if you’re worried.

Stop constructing and maintaining highways and roads. If you really need to get somewhere, buy an off-road vehicle to get over the deteriorating pavement or take a helicopter or something. Otherwise, stay home and watch Jerry Springer on TV.

Eliminate the FDA (Food and Drug Administration). This one’s a slam dunk. If you see people dying from an over-the-counter or prescription drug, don’t buy it. That’s how the free market works – people making choices. 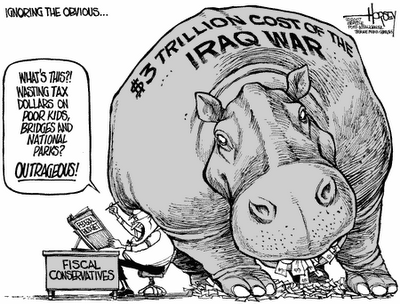 Eliminate traffic lights. Well, don’t spend money to take them down, just don’t use electricity to run them. Just let people work intersections out for themselves (in their off-road vehicles).

Eliminate or “streamline” (I almost choke writing that word – even as a joke) ALL regulation in the U.S. If you want safety, pay for it. If you want to be sure that when you buy a gallon of gasoline, you’re really getting a whole gallon, then measure it yourself. If you want a corporation to stop polluting the river in your town, pay them to stop or stop buying their products. If you want to breath without sucking carcinogens into your lungs, wear a gas mask.

In short, what I suggest to make Republicans happy is a complete return to cave-man times, but with some technology whiz-bangs and doodads that will allow us to pretend that life is still tolerable. And wouldn’t this be a great country to live in? Stark, spartan, desolate – except for the lucky few. Ahhhh, heaven.

This would mean more for the top 1% and less for the 99%. That’s the direction we’re heading, and the some of the changes I’ve listed are actually on the Republican agenda. Of course, these do NOT include eliminating the police or the military as these are Republicans’ favorite things – several steps above chocolate ice cream. A few of these I mean to be humorous (in a dark way), but if we want to live in a country with no taxes, we will have to live without government services. I’d rather pay a few bucks in taxes and live in a country that provides a decent living environment for it’s people.

2 thoughts on “Ways to Save Tax Dollars – Tom Rossi”