Would taxing the (super) rich a little more be fair?

Economists always talk about “margins” or “marginal this” and “marginal that.” What does this really mean and how does this concept apply to real life?

It’s like this: Imagine you’re ten years old and your mom brings you late for dinner on Tuesdays, after your little league practice. Your mean older brother has already eaten two of the pork chops (or vegetarian schnitzel, if you prefer) that your dad grilled on the barbeque and there’s only one left. Your brother wants it, but your parents intervene and give it to you. Was this a good decision?

It should be pretty obvious that it was. But why, exactly? In technical terms, the decision was a good one because you would get more “marginal utility” from your first pork chop than would your brother from his third. 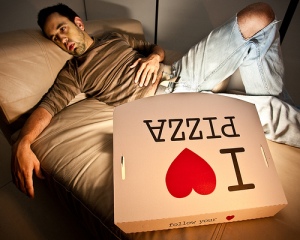 OK, are you ready for some fun? Let’s do some math! Let’s forget about millionaires. Most whine that they don’t “feel” rich anyway. Forbes Magazine says that there are 403 BILLIONAIRES (yes, with a B) in America, with a combined net worth of 1.3 Trillion dollars. That divides up to an average of 3.2 billion each. Do you think you could somehow get by on $100,000 per year? These people could “survive” at that level for 32,258 years on average without ever making any more money (not accounting for inflation which is predicted to be pretty bad starting in the year 8011).

My question is simple: What is the marginal utility of the third billion dollars out of $3.2 billion? How much does a person’s life improve if he or she has $3.2 billion versus a mere $2.2 billion? Does it enable a person to buy a third private jet, or a sixth summer mansion? What if that money were used to employ people to repair our nations aging and rotting infrastructure? That would mean over 8 MILLION jobs that would pay $50,000 for one year, or 800,000 jobs at $50,000 for ten years.

Now of course these figures are exaggerated somewhat. Some of that money would have to be spent on equipment, materials, etc. But I think the point makes itself. But here’s the kicker (and it’s a big one)… The billionaires would BENEFIT MORE from this scenario than they presently do by keeping that extra billion dollars. Why? Well, besides having better roads, water supply pipelines, sewage handling and treatment, and many other elements of the quality of life, there would be millions more people with the means to buy their products and services. In fact, the billionaires could probably recoup their “investment” (more or less) in just a few years in dollar terms, but the benefit to their country would outweigh that many times over.

So, I ask again: Would taxing the rich be “fair”?