Street Protests – Both Sides of the Streets.

So I understand why big business and government (if they even are separate entities) are worried when the masses hit the streets in protest as we are witnessing with the Occupy movement. And I can see why the democrats and other liberals see the threat of the rising Tea Party.

Where I am stuck is the criticisms being leveled by Tea Party or Occupy activists at each other. Now to disagree about policy or ideology is a vital ingredient in a democracy, but it surprises me to hear criticism being leveled at tactics. After seeing a bevy of Tea Party activists denigrating the  Occupy people for err…mass protests. I shared their audacity with two (separately) friends who proceeded to level the same criticisms about the Tea Party people.

One side of the street

Now I don’t expect every Tea Partier or Occupier to meet each other, occupy a Starbucks or independent cafe, and discuss matters over a cup of tea. But thinking people on both sides must be aware that they share some things in common.

– They are angry, dissatisfied and frustrated.

– They have taken to the streets because it seems the only way they will be listened to.

– They believe in grassroots organization.

– They have lost faith in the stagnation of government. 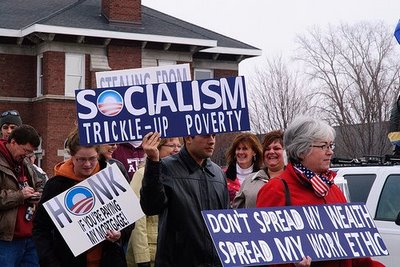 Something awesome is happening. The generally stupefied, apathetic masses are stirring. Whether they head for one side of the street to protest or the other, something has galvanized them into action. I don’t believe there are many of us in the middle, but that doesn’t matter. Let’s keep protesting, keep fighting for change, keep hoisting our signs…

But let’s stop for one moment and acknowledge that we are all in favor of democracy and freedom. Let’s celebrate living in a society where we can protest and debate. Let’s even be proud that we are drawing people away from mind-numbing reality shows and soaps. It is a healthy sign that people are lining up on both sides of the streets.

Then let’s get back to debating the issues.