Following on from last Friday’s post, I have been wondering how much a company can really be sustainable if it leans so heavily on its CEO. The way some people talked about Steve Jobs stepping down at Apple had me worried that my iPod and MacBook would self destruct in five seconds.

But there are certain companies where the CEO seems to take on legendary proportions. Apple is of them, but there is also Walmart, Microsoft and most recently Starbucks.  Howard Shultz wrote the book on building a company based on values and a dynamic business model. He literally wrote the book – Pour Your Heart Into It. 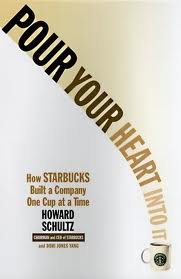 When Howard Shultz left Starbucks the company experienced its first downfall. I’m not sure this is attributed to his departure, it is hard to spend $4 on a cup of coffee when you lose your job and your house is foreclosed, but tellingly, Shultz was lured back and Starbucks repositioned. I am sure this is all recorded in the uber-CEO’s latest book, Onward, and I will review it soon as it rises up to the top of my To Read book pile.

I  wonder if it shouldn’t be a benchmark of a good CEO that s/he brings through a line of highly trained personnel from which one could be groomed as a successor? Was it a failure of Howard Shultz that  he had to make a comeback? I wonder whether the mood within Apple was as preoccupied as it was played out in the media.

And this brings me to another top-heavy organization – the government. At the risk of endangering my desire to become a US citizen, I wonder whether there isn’t too much emphasis on the President for governance and policy. Shouldn’t there be a bigger emphasis and accountability on those who sit on the House and Senate to fix our problems and lead us forward?

Perhaps we learn from the successful company models in restructuring our governments.