Really, there is nothing amusing about the riots on England and the looting of shoes, clothes, computers, and plasma televisions, . The damage, the carnage, the terrible impact on people’s lives and business. From another perspective, if this is the expression of an alienated generation who feel only hopelessness then it is even more problematic.

Was it greed or alienation?

However, The Economist took note that while these looters grab.ed clothes and electronics, they actually left the bookstore alone. Often two shops would be smashed while the bookstore in between them stood untouched. The only exception, and a sad one at that, was a gay bookstore Gay’s the Word. This shop was pelted with eggs and and had a front window smashed, though no books were stolen, leading to the obvious conclusion that it was a hate crime.
In one High Street, the only shop to escape damage was a Waterstones ( a bookstore chain), which led to one employee wistfully wondering that “If they steal some books, they might actually learn something.”

The Huffington Post picked up on this dilemma and asked the question: “Did the bookstores survive because the rioters respect reading–or because they simply don’t care about books?” 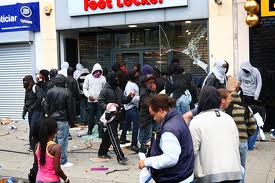 This leads to one of three alternatives:

1) Looters do not read anything longer than Twitter (apparently the forum where the riot coordination took place).

3) They all have Kindles, Nooks, or iPads (which I hope they purchased) and only read ebooks.

It’s a tough subject. Tomorrow we will look at who these rioters, looters, and non-tree book readers are.